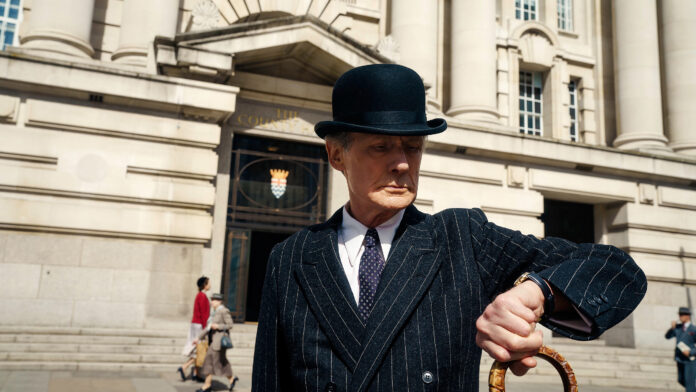 Bill Nighy quietly examines his purpose in Oliver Hermanus’ Living, which premiered at the 2022 Sundance Film Festival on Friday. Matching the pedigree of its lead actor, the film originates out of Akira Kurosawa’s 1952 film Ikiru, one of many Western remakes of the iconic Japanese director’s work (both the 1960 and 2016 versions of The Magnificient Seven, Last Man Standing). This time Never Let Me Go and The Remains of the Day novelist Kazuo Ishiguro attempts to breathe new life into this classic tale.

Taking place in 1950s London rather than 1950s Japan, Living touches upon the same themes and plot of the original. The stiff, bureaucratic Mr. Williams (Nighy) keeps mostly to himself, focusing on business rather than frivolity. Leading a team of mostly like-minded civil servants, his joyless days are spent at the office shuffling paperwork and giving concerned citizens the polite runaround. His nights are no better, making meaningless conversation with his son and daughter-in-law.

It’s not until he receives a terminal diagnosis that Mr. Williams starts to take stock and value in his existence. This realization doesn’t come with jovial reverence, but instead, quiet contemplation. Unable to share his news with his son, he finds solace in the strangers around him. From the rough but compassionate drunk on a night out (Tom Burke, Mank), to a younger female co-worker (Aimee Lou Wood, Sex Education), to rallying up his team (led by Alex Sharp) by fulfilling a final and much-needed community project, Mr. Williams tries to find the extraordinary in the mundane.

Attempting to match, let alone exceed, Kurosawa’s work is an undertaking. However, Hermanus is unable to capture the beauty and magic of the original film. Living eventually finds its stride in the film’s final third but by that point, the slow build prevents it from taking off to its full potential. Hermanus’s directing feels redundant, failing to find his own footing on the story. Ishiguro infuses British culture into the script, even including a Scottish folk song for Nighy to sing. However, the author takes a convoluted approach to get to the heart of the film’s meaning, weighing down its 102-minute runtime.

Nighy, whose most beloved roles are often over-the-top father figures, transforms himself into an understatedly reserved and regretful presence. When we first meet Mr. Williams he is the definition of British composure. It is Nighy’s quiet and contemplative transition that makes Living special. Unfortunately, Hermanus and Ishiguro don’t seem to know how to utilize their lead actor until the film’s end.