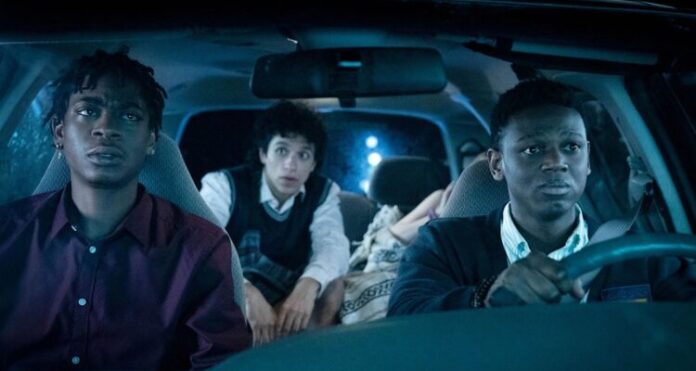 On the surface, Carey Williams’ intense college comedy Emergency looks like it traffics in familiar genre lanes. A trio of dudes, all best buds, set out for an epic rager, one final night of partying before the future awaits. Of course, anything that can go wrong will go wrong, friends will laugh, fight, and make up before the evening is through. And yes, all of that does happen in one way or another. But those movies, for the most part, exist in a colorless vacuum and Emergency definitely does not. It exists very much in the now, with police violence targeting Black and Brown people at record levels, and where every decision must be weighed by how it is viewed through a racial lens. It makes for an unbalanced but funny and insightful followup for Williams, who impressed me a year ago with his modernized take on Shakespeare, R#J.

An expansion of Williams’ 2017 short film, Emergency orients itself on the friendship between Kunle (Donald Elise Watkins, hugely impressive breakout) and Sean (RJ Cyler, a reunion with Williams after R#J). Kunle is the intellectual of the duo, a science nerd bound for Princeton University. Sean, well, not so much. He’s wasting every bit of time getting around to his thesis, and is much more focused on an epic party crawl to cap off the semester.

They’re also minorities in a nearly all-white university, and the screenplay by Williams and Kristen Dávila has a sharp ear for the language used when white fragility is ever-present. The film begins with Kunle and Sean in class where their British teacher’s numerous “trigger warnings” preceded a lecture on the use of the N-word, which she then goes on to repeat. So few Black people attend this fictional college, not unlike the one seen in Dear White People, that there’s an actual wall where Black students post of their many firsts, some legitimate accomplishments and others not-so-much. Sean wants to get on the wall for being the first to complete this legendary frat party tour.

This is, by far, the funniest and most confident stage of the film, as this oil and water duo of pals navigate these white spaces, including Kunle’s crush on a white girl. The humor is sharp and insightful, again similar in tone to Dear White People and even Get Out in some respects. The plot doesn’t kick off until it’s time to hit them streets, and instead they find Emma, a drunk, unconscious white girl in their dorm. The natural instinct is to call someone: campus security or the police. But for Black people, calling the cops has its own dangers. The decision isn’t so simple.

Emergency springs from there into an examination of Sean and Kunle’s differing perspectives. The hopeful, optimistic Kunle wants to get this girl help immediately and if that means dialing 9-1-1, so be it. But the cynical Sean knows what’s up and how it’ll go if this unconscious blonde chick is seen with two Black guys and their Latinx roommate, Carlos (Sebastian Chacon). It’s a recipe for disaster and, likely, one of them ending up dead. The most interesting aspect is watching how comfortable and trusting Kunle is when in white company, perhaps looking ahead to what life will be like at Princeton. He expects to  be treated like one of them and not like a Black person. Meanwhile, Sean doesn’t trust any of it and longs to hit the parties where others like him will congregate. This is contrast by Emma’s sister Maddy (Sabrina Carpenter), who gives in to racial biases at every turn and makes Kunle’s night a living Hell. She might be worried for her sister, but her prejudices are a bigger concern.

The constant shifts in tone does get tiresome after a while. One thing Emergency has going for it is that the stakes are incredibly high and we are always wary of them. The film highlights the ridiculous decisions Black people have to make to avoid a potentially deadly predicament, even for something as simple as getting help to someone in need. But these high stakes are a double-edged sword because all of the antics and silly hijinks feel a little out of place. Furthermore, the characters outside of Sean and Kunle are woefully underdeveloped, especially the females, which becomes a problem when we really need to understand one’s perspective in the final act.

Emergency nails it in the portrayal of Kunle, however, who finds his entire, oblivious, comfortable world shattered at the barrel of a gun. The realization that everything he thought had insulated himself from had found him anyway is heartbreaking, with Watkins’ horrified face relaying that deep well of hurt. Kunle’s admission to Sean isn’t met with an “I told you so”, but by a strengthening of their bond in the face of prejudices they are both now ready to face together. While this comic joyride is a bit bumpy, Emergency is ultimately a funny, scary, and hopeful trip that is well worth taking.