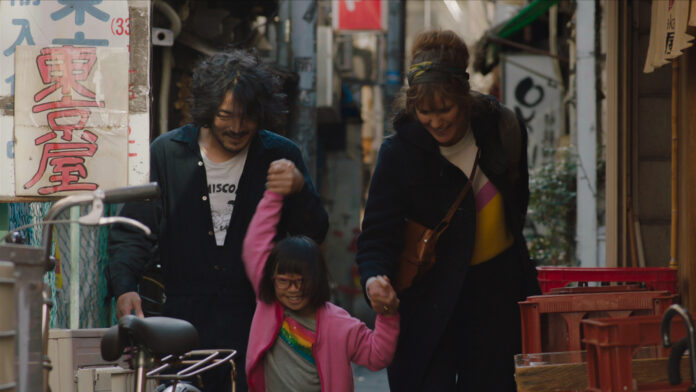 One of my favorite jokes from the first Deadpool comic book series is “The melodic sound of gunfire, the international language.” It doesn’t matter where you come from, everybody knows what violence sounds like. But there are other common languages that you don’t need words to communicate, and that’s what Bradley Rust Gray’s meandering romance blood is all about. The film centers on two people who don’t exactly speak the same tongue, but they find other ways to grow close; a cultural exchange that is ultimately rewarding for both.

Though maddeningly dull and infuriatingly stagnant much of the time, Carla Juri is the best reason to endure blood. My current favorite actress, Juri is the Swiss star of Sundance faves Wetlands and Morris from America, along with very non-Sundance Blade Runner 2049. Juri is as luminous and soulful as ever in the role of Chloe, a photographer in Japan following the sudden death of her husband. There ostensibly for work, she navigates a close, lived-in connection with her old friend Toshi (Takashi Ueno), a single dad and musician with a gentle spirit. It’s obvious right away that he loves her, but she is not in the place for that just yet. Her feelings for him are less fully formed, so soon after a tragedy.

Blood‘s other major positive is the gorgeous cinematography, capturing the natural beauty of both Japan and Iceland, the latter featuring a stunning backdrop of an actively gushing volcano. Juri makes her way through Japan, shot with a similarly observant, natural style as Gray’s prior films, The Exploding Girl and werewolf drama Jack & Diane. Chloe plays games with Toshi’s precocious daughter, Futaba (Futaba Okazaki),and cooks with Toshi’s grandmother (Sachiko Ohshima), while enjoying local cuisine and learning pearls of wisdom from her translator, Yatsuro (Issey Ogata), while also engaging in interpretive dance. There are few things that leave us more vulnerable, more open, than dancing across from another. There are few things that bind us to another person like enjoying a meal you cooked together. These moments in blood are honest and true, you just wish there was more of a story behind them.

Gray stays at a respectful distance throughout, and that is a major problem. The film has no narrative thrust. I get it; he’s trying to capture the sort of ebb and flow of real life, which moves at its own unsteady pace. This would be fine if the characters were more compelling, but Chloe’s despair is hard to grasp, largely because of the language barrier with the characters she must express it to. What we get are broken, really awkward conversations that don’t amount to much, and this is especially true when Chloe and Toshi are together. Scenes are shot in brief vignettes,adding to the overall superficiality of the experience.

But my goodness is Carla Juri something else. Practically in every frame, she brings such an emotional openness that you are willing to take even this leaden journey with her. Your patience with blood will wear thin quickly, but you’ll be eager for Juri to move on to the next thing that promises to be better.