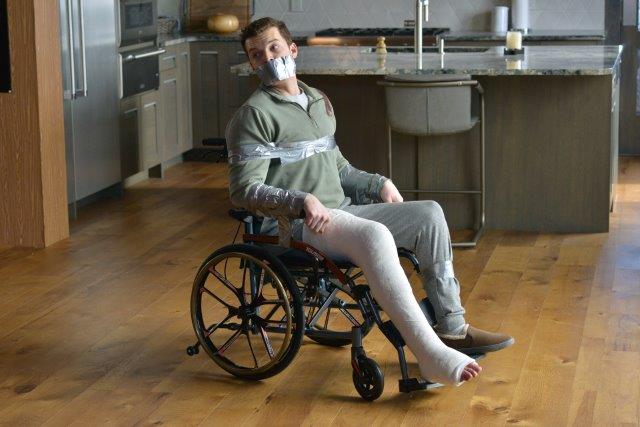 From a bird’s eye view, Shattered should be a very intriguing movie.

Showcasing a pretty interesting cast, including Cameron Monaghan (Shameless, Gotham), Frank Grillo (MCU films, The Purge films, Cop Shop), John Malkovich (pretty much everything), and newcomer Lilly Krug, Shattered looks to try and recapture the excitement of films of yesterday with a dangerous sexy femme fatale as she turns the tables on her unsuspecting mark. However, Shattered never really finds its footing, much less finds a way to stick the landing as the film progresses towards its inevitable conclusion.

Chris (Cameron Monaghan) is a reclusive and soon-to-be-divorced dad. Although he spends most of his time in his mountain mansion overlooking the rest of the snow-covered town in isolation, he’s incredibly loaded, thanks to him selling off his state-of-the-art security app he sold off, so he can enjoy retirement at a very young age. While his soon-to-be ex-wife is requesting that he sign his divorce papers and move on with his life, little does he know that trying to do so will forever change his life. On a trip to the grocery store where he runs into Sky (Lilly Krug). As the two hit it off having a brief discussion about the best wine to pick out for a fun night, Chris’ Spider-Sense probably should have gone off when a woman you JUST wants to take the night from a brief grocery story conversation to “let’s come to my place,” only for her to then say her annoying roommate (Ash Santos) is there and she basically invites herself over to his mountainside mansion to keep the night going.

Now, of course, he could just be thinking that he’s the luckiest guy in the world and manages to have a hot one-night stand with a beautiful stranger. But color him intrigued. He finds her the next day and manages to find a way to turn their brief fling into something more. While on their second date, he catches a random guy trying to break into his car. While Chris doesn’t want any confrontation, he does end up getting his knee broken by the would-be burglar who smashes his leg with a tire iron. Now stuck in a cast, his newfound gal offers to be his nurse and help him recuperate while his leg heals.

If you have been paying attention to thrillers for the past twenty years, you can see that there’s more than meets the eye in this situation. For Sky to be his live-in nurse/new girlfriend, he has to allow her access to his house’s complex security system. Before you can even blink, Sky’s made herself right at home in Chris’s new house and her roommate has ended up mysteriously dead, which catches the attention of down the hill motel owner Ronald (John Malkovich: the only actor who’s not taking this movie as serious as everyone else) after Sky’s roommate’s body shows up.

Then Shattered makes a C-change and reveals to Chris that Sky is not who she claims to be. In fact, she’s not as easygoing as she seems. Instead, she’s a hustler that has no problem sexing, conning, stealing, torturing, and finally killing those in the way of her big score. And there’s no bigger score than Chris and his millions. Here, the movie gets into Misery territory as Chris is now Sky’s hostage as she tries to milk him dry from his savings while repeatedly torturing him. Sky’s partner in crime Sebastian (Frank Grillo) shows up for the fun as well and the two make Chris’ life a living hell as they try and steal his money from under his wheelchair-bound and gagged nose.

Unfortunately, Shattered doesn’t work because we are expected to believe that Sky (who probably weighs 95 pounds soaking wet) is capable of overpowering well, just about everybody. Even with a shattered leg, Chris should be able to adequately defend himself against her. The film also takes way too long to get the ball rolling. Given that it’s only an hour and a half, it’s almost a good 40 minutes until the main plot is revealed to Chris, even though we the audience can see what’s going to happen pretty much within the first 15 minutes.

Director Luis Prieto does do a good job showcasing the beauty of the snowy mountainous countryside in the film, and most of the cast does work well within what they are given script-wise (especially John Malkovich who’s enjoying being a creepy motel manager) but Shattered never really has a high amount of tension. Most of the story elements can be seen a mile away. And for a movie that seems that it’s trying to be “sexy,” it never comes across as sexy nor as intriguing as the films of the past it’s emulating. Hopefully, this doesn’t stop what looks like a (pardon the pun) “promising young woman” in Lilly Krug’s performance as she plays just the right amount of crazy in a fun way.

Shattered is currently in select theaters and VOD.