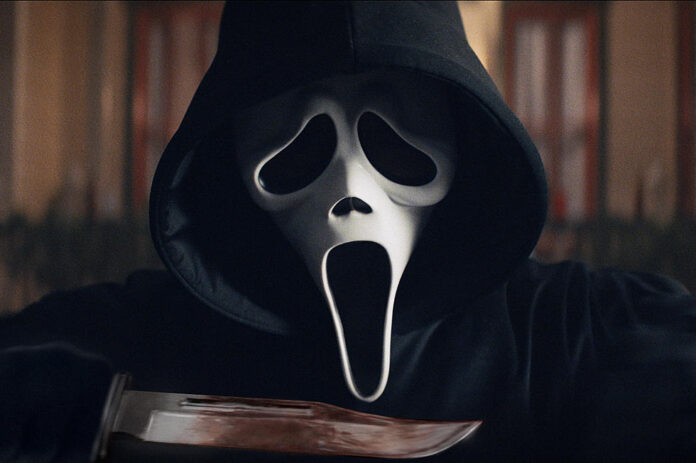 The makers of Scream think they’re so clever. It’s not exactly a sequel or a reboot of the groundbreaking 1996 horror, it’s something else…a “requel”, as one of the too-smart, too self-aware characters explains. This new Scream, which obviously knows it should’ve been titled Scream 5, knows what it is in today’s horror landscape, and it definitely isn’t “elevated horror” like The Babadook. It is in desperate need of staying relevant after 11 years away (Scream 4 was in 2011!!!), and while it is largely successful in modernizing a few of the genre tropes and amping up the gore in some surprising kills, the truth of the matter is this…

The old characters are still the best characters.

Scream is best when it focuses on the old guard, who return one more time to be hunted by Ghostface. These legacy characters, played by the returning Courteney Cox, David Arquette, and Neve Campbell who skipped out on the middling Scream 4, already know the well-worn rules on how to survive a masked murderer. We’re reminded often that they’ve done this…a lot, but these new kids think they’re hip to the game. They regurgitate the rules as they know them from previous Screams, or “Stab”, the movie-within-a-movie. Always look at the love interest, never trust anyone in the friend circle, never say “I’ll be back” because you definitely won’t be, and when one character goes off into the basement alone it’s practically a death sentence.

We know going in how it’s going to begin; a fresh-faced teen, in this case Tara (Jenna Ortega), answering the phone to that familiar question, “What’s your favorite scary movie?” Her response is enough to send the raspy-voiced caller into a murderous rage; “The Babadook”. She’s a fan of elevated horror, not like those Stab movies she can barely remember. Too bad, because he’s about to quiz her on Stab history, and if she gets one wrong her best friend will die.

Tara is just one of a stock group of likely victims and potential suspects, all fitting the familiar archetypes: jock, dork, horror movie aficionado. And they also have ties to the original murders, including Tara’s sister Sam (In the Heights actress Melissa Barrera) and her clean-cut boyfriend Richie (The Boys‘ Jack Quaid). The attack brings them, along with the aforementioned vets, back to Woodsboro where many have sworn never to return.

The new kids are dull as stumps. I was actively rooting for the Ghostface to slash ’em up in a grisly fashion. Barrera constantly brought the energy down during her In the Heights role and she’s extra stiff here, not at all someone who should be the sympathetic heroine of a horror franchise. Of the new bunch, it’s Ortega’s Tara who brings the most passion and puts up the most fight. Quaid is clearly savoring his role in a film where everybody is a suspect, and he gets to play off his nice boy image.

But damn, these kids don’t stand a chance against the returning champs. Twenty-five years of fighting off killers has given final girls Sidney Prescott (Campbell) and TV celeb Gale Weathers (Cox), plus guilt-ridden, grizzled ex-sheriff Dewey Cox (Arquette) some real “been there, done that” energy. They’ve moved on but never forgotten, and it hits you when you see Sidney pushing around a stroller. She’s got something to lose now. Poor Dewey, whose been “stabbed nine times and has permanent nerve damage” has never been the same. Still, they know the rules better than anybody, and yet the old rules no longer apply.

Director Matt Bettinelli-Olpin and Tyler Gillett, previous of the surprise hit Ready or Not, know what our expectations for the film are and use that against us. There are a few genuine shocks, at least one unexpectedly horrific and tragic demise, and plenty of red herrings. But Scream isn’t actually scary or anything; it’s a whodunnit that is only as good as your emotional investment. Sometimes the constant self-referential humor feels archaic, because let’s be honest, none of it has really changed that much over the years. And playing to the idea of “toxic fandom” and its corrosive effects on movie franchises is way too on-the-nose like so much of the movie tends to be. Other indie darling horrors and even Jordan Peele get name-checked, an acknowledgment that Scream is past its prime in so many ways. But the nostalgia cuts deeper than Ghostface’s blade, and if the franchise is to continue it would be smarter to embrace rather than to bury.