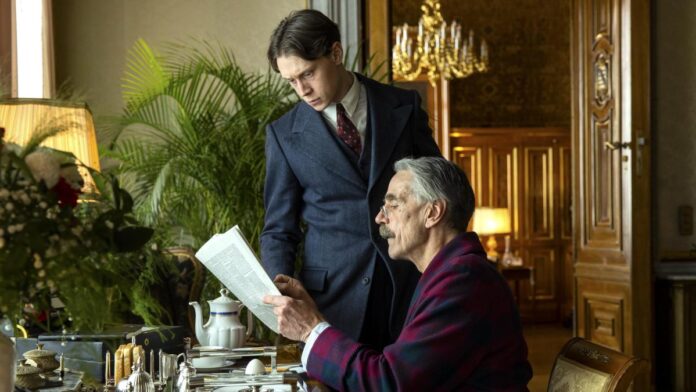 Netflix tackles the events leading up to World War II in its new historical fiction Munich: The Edge Of War. A quick prologue introduces us to Oxford educated friends Hugh Legat (George MacKay) and Paul Von Hartman (Jannis Niewöhner) in 1932. Bright eyed and bushy tailed they rejoice at a party before political ideologies and differences destroy their friendship. Six years later and Europe is on the brink of war. Hitler (Ulrich Matthes) threatens to invade Czechoslovakia as British Prime Minister Neville Chamberlain (Jeremy Irons) desperately tries to prevent war. Legat and Von Hartman’s careers are at similar points, just on opposite sides. Legat is Chamberlain’s private secretary while Von Hartman is Hitler’s press secretary. 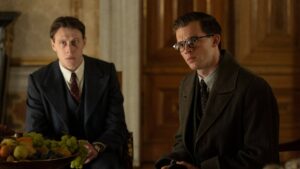 What Legat doesn’t know is that his old friend is not the man he once knew. The friend that was willing to end their friendship due to his belief and support of Hitler has changed. Von Hartman has seen the horrors of Hitler’s rhetoric in person and is terrified of what the future brings. While he continues to progress in Hitler’s government, he and a few others are secretly formulating plans to overthrow him. Von Hartman comes into possession of a document outlining Hitler’s plans for Europe that shows his true nature. As Hitler calls for a meeting in Munich between a handful of world leaders, Von Hartman sees an opportunity. He must risk everything to get the document into the hands of the English, and who better than his old friend Legat? 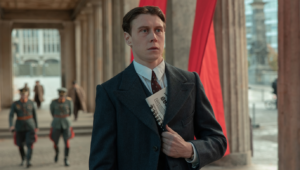 Munich: The Edge Of War is directed by Christian Schwochow and based off Robert Harris’s novel Munich and adapted for the big screen by Ben Power. Harris uses his creative license to manipulate historical events and the film follows suit. This may sour history buffs’ view of Munich: The Edge Of War, who will need to put historical accuracy aside. The strong cast and performances drive the film. The leading players MacKay, Niewöhner, and Irons deliver impassioned performances during this tense time in history. MacKay’s Legat unfortunately is the most timid of the group and his performance gets overshadowed, especially by Niewöhner. Von Hartman is a strong-willed character and puts his all into his beliefs which Niewöhner delivers flawlessly. While the performances may drive the film, this ‘spy thriller’ lacks both in espionage and thrills. The film drags at points not truly portraying the historical impact of it’s players. 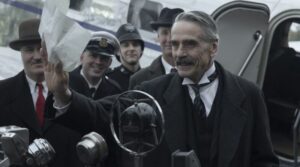 Harris and Irons depiction of Chamberlain is one of main focuses in Munich: The Edge Of War. History has not painted Chamberlain kindly, viewing the Munich Agreement as a blunder. Harris takes a more sympathetic view of Chamberlain. Having seen the horrors of the first World War, Chamberlain feels that he must do whatever necessary to avoid another. Instead of bowing down to Hitler’s demands, Harris frames Chamberlain’s actions as compassion and trying to save countless lives. Schwochow sharp direction and storytelling can only go so far in Munich: The Edge Of War. The film doesn’t explore the backstories of the characters enough, especially Von Hartman’s dramatic ideological shift. There are interesting pieces of dialogue, but overall, the film lacks those true moments that stick in your mind. Munich: The Edge Of War may not have staying power like other WWII dramas, but it merits a rainy afternoon Netflix watch.

Munich: The Edge Of War is playing in select theaters and will be available on Netflix January 21, 2022.