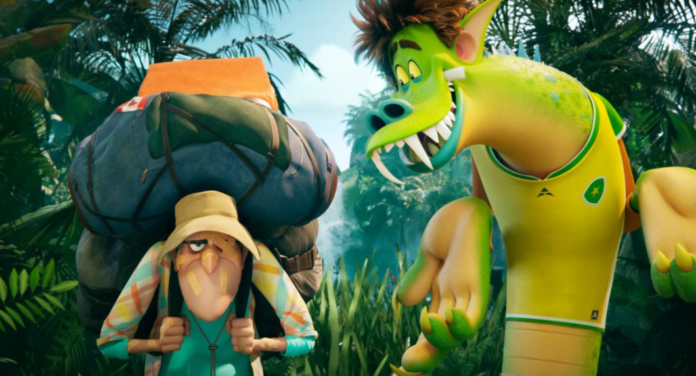 Drac and the Pack are back and like you’ve never seen them before. Not only have there been changes within the Drac Pack but also within the voice casting for this fourth and reportedly, the final film of the Hotel Transylvania franchise. Hotel Transylvania first made its film debut where it was widely well-received back in 2012. We first meet Dracula (voiced by Adam Sandler for the first three films), his teenage daughter, Mavis (Selena Gomez) and the backpacking human whom she falls in love with, Johnny (Andy Samberg)- who all face the dilemma of acceptance. We are also introduced to Drac’s crazy but tight-knit and long-time family, friends and guests who come to stay at their protected castle. Over the last decade, The Hotel Transylvania franchise spawned several more fun loving films that touch on familial development and growth in 2015, 2018, with the final film releasing this Friday, January 14th, 2022.

Hotel Transylvania: Transformania reunites with your favorite monsters for an all-new adventure that presents Drac (Brian Hull) with his most terrifying task yet. When Van Helsing’s (Jim Gaffigan) mysterious invention, the ‘Monsterification Ray,’ goes haywire, Drac and his monster pals are all transformed into humans, Johnny (Andy Samberg) becomes a dragon-like monster, and Blobby has turned into a simple jello mold. Drac no longer has his powers, and Johnny is loving life as a monster but they must team up and race across the globe to find a cure before their transition turns seriously dangerous; and before they drive each other crazy. With help from Mavis (Selena Gomez) and the wacky human Drac Pack, the heat is on to find a way to switch everyone back before their transformations become deadly permanent. The film also features the returning voices of Kathryn Hahn (Ericka), Steve Buscemi (Wayne), Molly Shannon (Wanda), David Spade (Griffin the Invisible Man), Keegan-Michael Key (Murray), Fran Drescher (Eunice), and Asher Blinkoff (Dennis). Kevin James who has voiced Frankenstein for the first three films has been replaced by Brad Abrell for the fourth and final installment.

Kevin James and Adam Sandler no longer voice Drac and Frank and it’s extremely noticeable. They bring a quality of comedy, compassion, and experience to their characters that are unique and bonding. Brian Hull and Brad Abrell do their absolute best but it’s more than obvious that they’re acting based on what Sandler and James would do vs. what they would contribute to those specific characters, and it shows. I admire the approach of trying to keep in sync but they are missing all those awesome qualities that Sandler and James bring to Drac and Frank. Young and newer viewers may not notice but for adults and loyal followers, it’s plainly obvious. Aside from that, Hotel Transylvania: Transformania produced very few laughs and surprises leaving the whole thing to feel largely underwhelming. Even the soundtrack/musical vibe felt lackluster. Ericka (Kathryn Hahn) was my favorite character and carried the whole film. Hahn brings her fantastic talents to establish a strong character who is the backbone for this family of chaos. The film does it’s best to capture the original essence to close out with but everything felt flat, tired, unexciting, and barely made it across the finish line. Hotel Transylvania: Transformania may do well for young children but for the older crowds and loyal fans (like me), it’s largely disappointing, easily forgettable, and I’m sadly relieved that the entire franchise finally over.