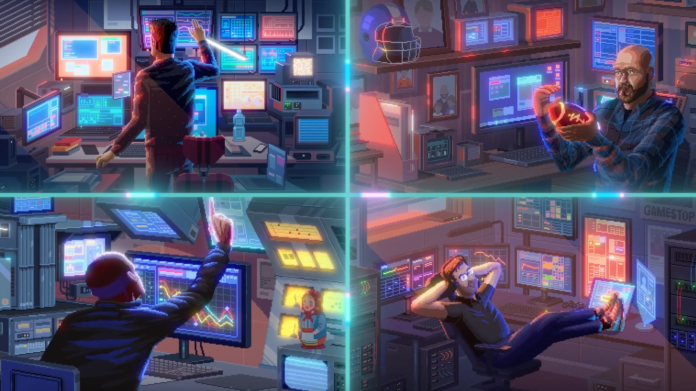 It’s exactly one year ago (2021) that brick and mortar video game retailer Gamestop had unexpectedly shocked the world. Gamestop was the top story on every news outlet as its stock had risen over 2500% amidst a wild fire of volatility. A year prior to that, Wall Street and bearish traders were touting the gaming company as nothing more than an archaic business model. Proclaiming that the company as on its way to failure, despite no news actually coming from it. They pushed short sales on the stock so they could rake in millions off of Gamestops loss. These hedge fund investors and their loyalists went on tv, radio, the internet, and wherever they could voice themselves to declare that Gamestop was on it’s way to certain death. They had even dubbed the company as a “Blockbuster 2.0”. As a result, the stock plummeted and their dismissal of GameStop appeared to be, to no surprise at all, a self-fulfilling prophecy.

However, a motley crew of misfit investors believed in the company and vehemently stood their purpose and ground. Their bold and daring action incidentally drove the numbers  back it up and they had the data to make it happen. This ‘man vs. giant’ story of traditional vs. non-traditional investors was an oncoming battle that had been brewing for years. Gamestop: Rise of the Players is a documentary-esque film that brings together the unlikely band of contrarians who defied Wall Street with conventional wisdom and placed a steep bet on themselves, their own research, and on a business that even the big guys was pushing everyone else to to give up on. Especially, for their own profit.

Gamestop: Rise of the Players comes from makers and directors of Console Wars, Jonah Tulis and Blake J. Harris. They have banded together with co-producers Dan and Josh Braun to unveil the story of the Gamestop stock market phenomenon that came to be. They feature exclusive access to the original players who lit the fuse on a historic amateur investor uprising. Justin Dopierala, Rod Alzmann, Dmitriy Kozin, Farris Husseini, Jenn Kruza, Tom Barton, Jeff Tarzia, Rigoberto Alcaraz, Andrew Left, and partners Joe Fonicello and Abbe Minor are smart, independent investors from all walks of life who saw the value in companies like GameStop. Despite being in lock down because of Covid restrictions at the time, they, like clockwork, would meet up and build a strong community sense of likeness that was fueled by determination. Through rigorous research openly shared via livestreams, social media comment sections, and b/vlogging they were successfully able to create a new and innovative way of pushing back against the bullheads of Wall Street and opposing investors. Despite their best efforts, the group was laughed off, labeled “crazy”, and even banned from posting on certain platforms.

And then it happened…the Gamestop (GME) stock began to soar. Reddit and other social media platforms mobilized around the GMEdd squad and “squeezed” out the hedge funds, depleting their funds in the process.Their victory exposed a lot of long-held problems with Wall Street and showed the world the inner workings of these carnivorously greedy hedge funds. Not enjoying the ‘straight to the face’ shot swung Wall Street’s way, it wasn’t long before the major money firm, Citadel, bought a chunk of the GME stock to put an end to the rally of GMEdd’s rise. Within days, online brokerage Robinhood halted trading of the GME stock for everyday investors, allowing the big hedge funds to take advantage of the situation. This caught the attention of the world and even the U.S. Congress. This attention reverted the rise of GME stock and despite what little efforts they put into crushing their competitors, it would later come to backfire on them. GMEdd member, Roaring Kitty, (yes, you read that right) AKA Keith Gill, put them all the same by standing his ground and digging his heels in. Even as Roaring Kitty spoke, the GME stock made an upward climb and it only skyrocketed from there.

Gamestop: Rise of the Players is a fantastic film that really spotlights the human side of sensational and cutthroat business drama. The original members of GMEdd, despite their own personal struggles, successfully rallies an army of fed up individual investors and ultimately tipped a new generational scale of how people can buy/sell their money. This team of very likable ragtag misfits not only formed what will probably be life-long friendships but that Gamestop boom has earned them a profitable upper hand. A long overdue example has been set and this event could ultimately impact the way that even Wall Street handles their future prospects of investment. Since then non-traditionalist have jumped onto other brick and mortar businesses like AMC, Tootsie Roll, and Bed Bath and Beyond but it didn’t have the same pizazz as what went down with Gamestop. Where it goes from here is still unknown but regardless, this film does an excellent job of laying out the facts, seeing the faces/personalities behind the GME movement to hear what they have to say, and mixing some killer tunes and graphics. I highly recommend giving it a watch.

Gamestop: Rise of the Players will be released in theaters by Super LTD on January 28th.