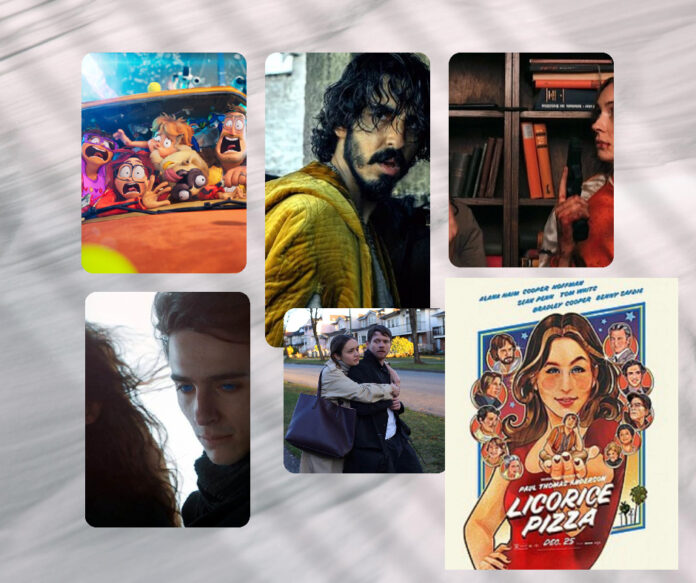 I’m not going to say 2021 was the longest year ever, but Judas and the Black Messiah was eleven months ago. And that’s been part of the problem for me, I guess. Last year’s awards season stretched so deep into 2021 because of COVID-19 delays that this has felt like two separate years.

Doing these end-of-year lists for so long has taught me the best way to do it is to pick the films that stayed on my mind. That means some films that I may not have scored all that high show up here because, well, they simply won’t go away. Any list of this sort depends on the passage of time, because that’s the true judge of whether a film is great or horseshit. Does it stand the test of time? Has it made a lasting impression on your thoughts? These films have.

18. The Mitchells vs the Machines

This year Nicolas Cage starred in the bonkers Prisoners of the Ghostland, animatronic horror Willy’s Wonderland, and Pig. If you looked at the plots for all three they all seem pretty ridiculous, but Pig is a different beast entirely. Cage reminds you that he’s one of the best actors in the world when he puts his mind to it, starring in a surprisingly beautiful, tragic story of a man who has lost everything of material value but refuses to lose himself in the process.

Both a gaudy tribute to the swinging London nightlife of the 1960s and a dire warning about toxic masculinity, Edgar Wright continues to prove he’s one of the most stylish and exciting filmmakers around. His ambitions here are too big for the story to sustain, but I was too distracted by the spellbinding production design and hypnotic soundtrack.

No film energized me this year like In the Heights did. From the moment it was over I was dying for it to restart so I could soak in its good vibes, it’s primarily Latinx cast, dynamic cinematography that lights up the Washington Heights, and uplifting story of big dreams. Like pretty much every major musical adaptation it failed to live up to box office expectations, but I don’t care. This was the movie that defined the summer for me.

Marvel may have crushed the competition at the box office, but DC had the most deliciously warped superhero movie of the year. The Suicide Squad is everything we want from James Gunn, bringing the comic’s irreverent, ultra-violent, outrageous attitude to the big screen. There are a million spinoffs I want to see coming out of this: a Bloodsport/Ratcatcher limited series, a King Shark prequel, and of course the one we’re actually going to get, Peacemaker. I want it all.

Jane Campion turns her feminist eye to the most masculine of genres, crafting an exquisite film that turns its rugged characters inside out and reveals the melancholic truth. Benedict Cumberbatch’s subtle performance as the bullying cowboy Phil is utter perfection. Is he a cruel villain? Or a tortured soul who should be pitied for being born in the wrong era? The dark twists and turns this film takes will leave you reeling, and eager for a second, third, or even fourth viewing, as it did for me.

A damn James Bond film has made my top 20. Not that I’m a hater of the franchise it’s just never meant much to me, but No Time to Die checked every single box that I’ve longed to see from it. Daniel Craig, in his final time suiting up as 007, gets a massive story that is also the most personal the super agent has ever had, making me feel something for the character that I never have. The finale, including those heartbreaking but heroic final moments, hit me right in the chest. I don’t know who takes on the role next but they’ve got big shoes to fill.

I can be honest, Don’t Look Up is as upsetting as it is hilarious. It reflects so much of the collective denial that we see, whether it’s about COVID-19, or climate change, or gun violence. That Adam McKay has found a way to address this sorry state of affairs with such ridiculous over-the-top humor is a credit to him, and played by a star-studded cast it’s a satire that is right on the mark. The end of the world has never been this fun.

This list is funny for all of the things on it that I typically don’t give a shit about. Dune is the ultimate thing I’ve never given a shit about. The novels, the previous adaptation from the ’80s, all trash. But not this version by Denis Villeneuve, which is massive sci-fi space opera of the kind that Star Wars used to be able to do effectively. Now I just want part 2 to get here, right now, so I can see this battle over the spice unfold in all of its gigantic proportions.

Well, there was bound to be at least one Marvel movie on here. In an up-and-down year for Marvel, Spider-Man: No Way Home was an incredibly rare feat. A sequel of overwhelming ambition that manages to be as fun as its predecessors, while also a big wet kiss to fans of multiple generations. The result is that Tom Holland’s Peter Parker is a more interesting character for whatever his MCU future holds, and previous versions of Spider-Man have their stories completed in a way that is oh so satisfying. Nothing matched the experience of sitting in a crowded theater of people who didn’t know what was coming, and feeling that excited energy when the big shocks hit. Incredible.

I’m not gonna lie, this one was a relief to me. Paul Thomas Anderson has long been the director whose films I enjoy most, but he hasn’t made one I’ve liked in a while. Licorice Pizza is a return to hip, romantic, nostalgic California period pieces that nobody does better than him. Some will balk at the story, a flirty friendship between a 15-year-old played by Hoffman, son of the late Philip Seymour Hoffman, and an adrift 25-year-old woman, but the screenplay treats it with respect and doesn’t hide from it. It’s shaggy, wandering nature makes it feel like you’re hanging out with these characters, becoming part of their many schemes and misadventures. I could’ve hung out with them forever, selling waterbeds and pinball machines. PTA is back!

2022 Oscar Nominations: ‘The Power Of The Dog’, ‘Dune’ Lead The Pack While ‘Flee’ Makes History