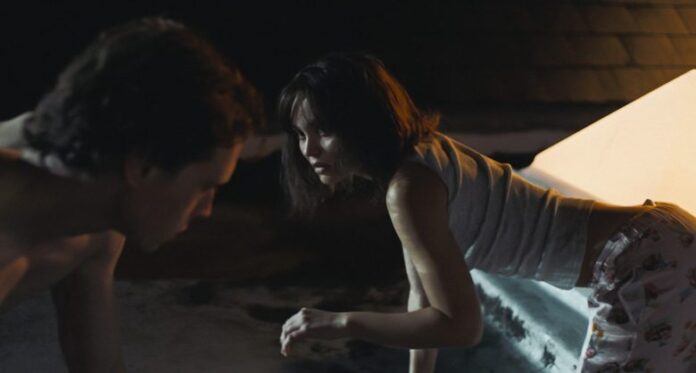 George MacKay is an incredible actor, given to performances both soulful and physically demanding. Check his subtle work in Captain Fantastic and family horror Marrowbone, and of course, his commanding performance in 1917. He’s an actor that makes you believe in what he’s doing, no matter what he’s doing, and that has never been more true than in Wolf, a film that makes you want to poke fun at it at every turn.

That is, naturally, except for when MacKay is on the screen. Nathalie Biancheri’s film examines a very real subculture, that of people with species dysphoria, or otherkin, who believe they are animals. Biancheri takes on the topic seriously, pointedly, almost documentary-like in presentation. MacKay plays Jacob, a young man dropped off at a clinic known as “the zoo”, a name which seems to undermine its patients right from the start. Jacob believes he is a wolf trapped in a man’s body, but unlike the others there, he wants to fight this feeling rather than embrace it. Others, like the girl who believes she’s a parrot and dresses the part, or the bully who believes he’s a bear, or the sad girl a Chinese panda, just want to be left to live their lives as they choose. Why should they be forced to undergo treatment for that? What’s the harm?

The problem, at least with Jacob, is a past checkered with violence spurred by animal urges. Try as he might, these feeling reemerge when he encounters Wildcat (Lily-Rose Depp), a girl whose problems extend far beyond the others and into abuses suffered in the outside world. But these abuses aren’t much better in “the zoo”, where the zookeeper (Paddy Considine) uses blunt force and humiliation to often disastrous effect.

Bianchi focuses less on why these people believe what they believe and more on how they are treated. What forces them inside, and keeps them there, is a belief that they cannot live out in the real world, where they will be mistreated. But the so-called rehabilitation inside “the zoo” demeans them, strips them of the little bit of humanity they claim to be trying to find. A particular scene of egregious disconnect finds Jacob being tortured while the rest of the patients dance in the next room.

What’s intriguing about Wolf is undercut by slim characterization and a dull, toothless presentation. The film drags, and the occasional nocturnal outings with Jacob and Wildcat, which get increasingly sensual, only briefly spice up the bland setting.

Performances on the other hand are strong, and not just by MacKay. The entire cast are exceptional in their body movements, moving like the animals they portray with such commitment that it seems unnatural when they have to keep it hidden. MacKay is, as usual, charismatic and an actor who grabs your attention. I’m not convinced of any chemistry with Rose-Depp, mainly because Wildcat is so underwritten. Is there such a thing as a manic pixie dream cat?

Wolf examines the feral, animal side in all of us but does so with too much restraint. It’s only MacKay who emerges as the leader of this pack.

HBO’s ‘House Of The Dragon’ Arrives This August; New Look At The ‘Game Of Thrones’ Spinoff