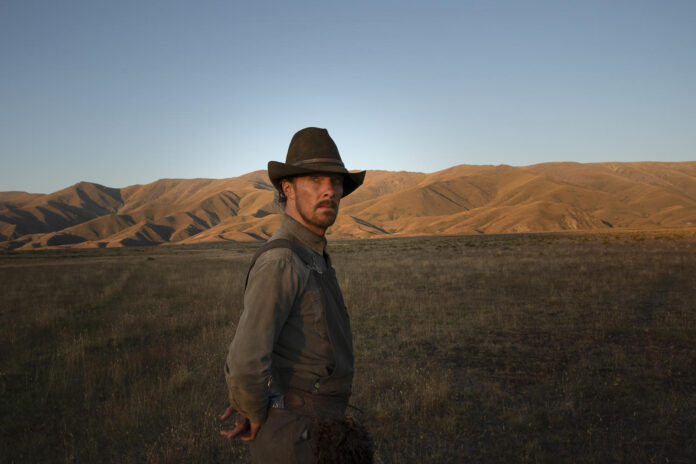 The Western genre has survived the modern era of filmmaking through constant deconstruction, even as recently in Clint Eastwood’s Cry Macho. But few have done it with quite the skill as Jane Campion with The Power of the Dog, her first feature since 2009’s underrated Bright Star. Her gift for exploring femininity from many different perspectives makes her uniquely suited to this old west thriller where masculinity isn’t what it appears to be.

Benedict Cumberbatch takes on a role we’ve never seen him play before, that of an old west bully. As Phil Burbank, he pushes around his brother George (Jesse Plemons), calling him “Fatso” with the ease that suggests it’s a pretty common thing. The siblings run their ranching business together but it’s George who does the civilized work, while Phil prefers to get his hands dirty. “That’s honest dirt”, a politician tells Phil later at a disastrous dinner party at their home.

It may be honest dirt, but most would wish Phil to be a little less honest. He’s cruel to everyone at every possible opportunity, including poor widower Rose Gordon (Kirsten Dunst), owner of the restaurant they passed through in town. She, along with her skinny, creative, effeminate son Peter (Kodi Smit-McPhee), are mercilessly targeted by Phil, who quietly delights in their suffering. Things only get worse when George brings Rose home as his new wife, as Phil continues to treat her awfully, while taking a strange liking to Peter.

Here’s the thing about Phil: he may look and act like an unsophisticated brute but he’s definitely not. He’s graduated Phi Kappa Phi from Yale, and the only way you’d know it is his slickness with the tongue and the way he deviously crafts mind games that obviously took a lot of forethought. But he chose this rugged rancher life, and constantly talks up his mentorship under Bronco Henry, who he obviously holds in high regard. But…why? What did this relationship with Bronco Henry really mean to him? Campion, who took to adapting Thomas Savage’s novel, lays out the bread crumbs but nothing about The Power of the Dog unfolds quite as you expect, and that’s what makes it so fascinating.

Phil doesn’t need to be overly callous. His schemes are simple and diabolical, enough that George barely even notices…or is too afraid to stand up to his brother.  But there are levels to this. The story is set just as the old cowboy ways were starting to fade, and both brothers are stuck in the middle. George might be the more civilized of the two but it’s not his company that is sought when company comes to visit. Ironically, it’s Phil’s verbal discourse they seek, although he refuses to even wash up and participate. George is nice but inattentive to Rose, while she gets all of the attention she can handle from Phil.

Of course, this is a Campion film so it’s poetic, steadily paced, and absolutely gorgeous thanks to cinematographer Ari Wegner, on a roll right now after lensing Zola earlier this year. Mounting tension is contrasted by beautiful rolling hills, which after a time begin to look less enticing and more like a prison. It’s so fitting for characters who are all trapped, in one way or another, by society’s expectations.

Ditching the eccentric genius roles he’s played far too often of late, Cumberbatch is so good, so charismatic that he almost makes you like Phil despite the terrible things he does. There comes a point where our perception of him gets shaken up, and Cumberbatch fights the urge to make Phil more likable. He gives the kind of nuanced portrayal that other actors would have gone overboard with. Dunst, who I think we all still see as the bubbly teen cheerleader, makes you feel every moment of Rose’s tragic downward spiral. The only problem is that Rose never gets her moment, either to stand up to Phil or to lash out at George for being a lousy husband. Something. But the women in this film don’t get much to say or do, and that includes co-stars the caliber of Thomasin McKenzie and Frances Conroy

And I hate to call this a breakthrough because he’s been so good for so long, but Kodi Smit-McPhee does the finest work of his acting career. As Peter, whose awkwardness hides a toughness someone like Phil could never understand, Smit-McPhee recalls his previous best performance in another old west deconstruction, Slow West. He should be on every director’s speed dial when taking on this genre, I’m just sayin’.

For me, The Power of the Dog ranks as the best work Campion has ever done, surpassing even The Piano. That she made us wait over a decade for it is criminal, and let’s hope that with her voice so badly needed right now she won’t make us wait so long for what’s next.

The Power of the Dog is streaming on Netflix now.