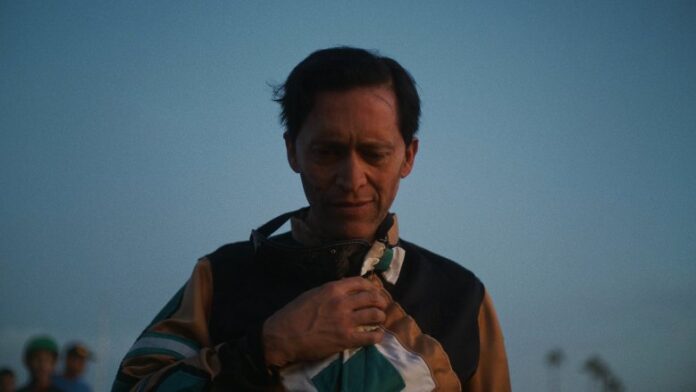 NOTE: This review was originally part of our Sundance Film Festival coverage. Jockey is open in theaters now.*

Spend enough time at the horseraces and you begin to see beyond the showmanship of it all. It can be easy to caught up in the pomp and circumstance that comes along with the sport, especially during Derby season, but what they don’t tell you about is the physical toll it takes, not just on the horse but on the rider. For a horse, the end comes swiftly and brutally. But for a jockey, it’s a slow, painful grind and somebody isn’t always there to tell you to hang it up.

Jockey, a moving, soulful drama that has been all the buzz here at Sundance, having just been acquired by Sony Pictures Classics, is the feature debut of director/co-writer Clint Bentley. Bentley’s father was a jockey, and the film is essentially a celebration of the people who are the heart and soul of the horseracing industry. It’s also a pointed examination of how that business chews them up and spits them out. 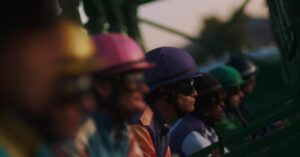 Most notably, the film offers Clifton Collins Jr. the best role of his career, and the meatiest thing he’s done since Capote in 2005. He plays Jackson, a veteran jockey still hanging on as younger riders move in on his territory. His failing body, including at least three broken backs, is making that difficult. But this is his life. Everything he loves is here, and that includes longtime friend and trainer Ruth (Molly Parker, wonderful), who sees what’s happening even if Jackson has too much pride to admit it.

Just as Jackson is girding himself for what is likely to be a final run, a couple of factors ensure it will be something to remember. First, Ruth acquires a dream racehorse that has the stuff to be a champion, and Jackson wants to win it for her. Second, and by far the biggest blow to his cowboy ego, is the arrival of Gabriel (Moises Arias), a rookie jockey who Jackson sees something of himself could. It might be because he says he’s Jackson’s son, from a relationship that fell apart years ago.

This moment could’ve been played melodramatically, and in lesser hands the mystery of Jackson and Gabriel’s relation would be a long, ongoing mystery. Immediately, we know that Bentley and Greg Kwedar script is going to take a more subtle, less demonstrative approach. Jackson denies he could be the boy’s father, but his words are just that…words. His face says otherwise; you can see him searching the recesses of his memory to explore the possibility. More importantly, his actions tell a lot more. He takes Gabriel under his wing, teaching him all he knows, engaging in his own “52 Pick-Up” training sessions, and basically doing everything he can to help the boy not make the same mistakes he did.

This is inherently a Hollywood-style father/son drama, but Bentley plays it straight and with real dramatic stakes. You’re not going to find big blow-ups or histrionics. The closest thing that comes to it is an encounter between Jackson and Gabriel’s mother that takes an unexpected turn, but even then the aftermath is played with the kind of emotional complexity that informs both of their characters.

Filmed at an actual Arizona racetrack with real jockeys filling in the details, Jockey takes the winner’s purse in authenticity. Bentley walks us through the rigors of the jockey’s day, in particular the exacting diet they have to endure. A jockey talks about the impact of their regiment; they’re small and in phenomenal shape, but their tiny frames leave them unprotected from the bumps and bruises. Injuries, some small, many of them not, are a regular thing and just accepted a part of the job. It all sounds like the horseracing version of The Wrestler. The difference is Jackson isn’t risking his life for the roar of the crowd, but out of genuine love for what he does. 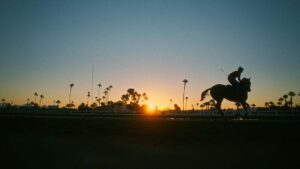 Collins has always had “it”, even if that hasn’t translated to him becoming a superstar actor. If there has been a film that wasn’t improved mightily by his presence, I’d like to see it. Whether the role is big or small, he’s just an actor who steals moments and slips into characters effortlessly. As Jackson, he wraps himself in the jockey’s pain and regrets, a lifetime of them that you can see in the eyes. This is tremendous, awards-worthy acting from Collins, and he deserves to get more roles like this as a result. Arias, who started out as the weird kid in The Kings of Summer, captures Gabriel’s need for a father-figure in his life. Of all the things Gabriel and Jackson have in common, sheer bull-headed stubbornness is the thing that causes them the most trouble. As Ruth, Parker gives life to a role that could’ve been one-note, but turns out to be surprisingly deep and critical to our understanding of Jackson. She’s more than just his friend, but a potential love interest, as seen during a celebratory drinking binge, but also an enabler to some of his worst instincts.

While a lack of tension and conflict is a drag, it’s more than made up for by genuine, lived-in performances that make you feel like you’re intruding in this little corner of the horseracing world. Continuing to avert from the usual redemption narrative, Jockey offers no easy answers for Jackson. There’s still time for him to find what he’s looking for as the finish line is still quite a few lengths away.