After seventeen years in prison, Marvin (Jake McLaughlin), is finally out in Home – and that’s exactly where he’s heading. With only a small backpack, a tracksuit, and a skateboard, he makes the long trek back. Surrounded by desolate landscape, Marvin keeps skateboarding until he’s finally at the door of his childhood home. His mother Bernadette (Kathy Bates) is the only immediate family he has left. His father ran out and his brother tragically passed when they were kids. Marvin is desperate to try and do whatever he can to earn forgiveness from his mother and those he’s hurt. He wants to move on from the atrocity of his past, but not everyone is so quick to forgive and forget. 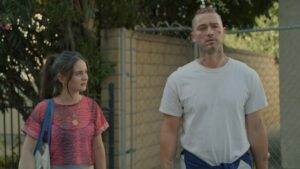 Marvin is from a small town where word travels fast. It seems that right away everyone knows he’s back, and most are not quick to welcome him with open arms. Marvin is able to find comfort in Wade (Derek Richardson), his old childhood friend who has stumbled on hard times. Bernadette’s caretaker Jayden (Lil Rel Howery) is also able to overlook Marvin’s past and becomes a source of warmth. However, those hurt by Marvin’s actions still have open wounds. Mainly Russell (James Jordan) who feels the need to settle the score. Complicating things is the fact that Russell’s little sister Delta (Aisling Franciosi) sees the good in Marvin and forgives him. As Bernadette’s health declines, Marvin does all he can to repair their relationship.

Franka Potente brings her talents from in front of the camera to behind it with Home. The film is the veteran actor’s feature length writing and directorial debut. It is quite the debut as well. Home is a powerful film that is driven by dialogue and the relationships between the characters. Luckily for Potente, and the audience, the actors across the board are top notch and turn in fantastic performances. Potente’s script resonates as well. It is awkward at times, but so is life. There is something to be said about a good story told well, and succinctly, in this day and age. No need for superpowers or a CGI dragon to save the day during a two-and-a-half-hour affair. Potente manages to tell an interesting story without the need for any over-the-top flair in just over ninety minutes. 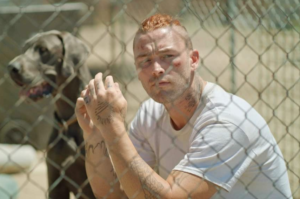 That being said, it is hard to say that Home is a feel-good movie. The film will definitely bring about emotions, some good – but they are mixed. There is a lot of sadness and a lot of pain. The score and imagery reflect that. Somber tones, muted colors, and shots of desolate trailers, junk, and junkies become familiar. Yet through it all there’s hope, family, and love. The music becomes more touching, sunlight creeps in, and so do moments of joy. When the dust settles, Potente has put together a solid drama. Home strikes the perfect combination of a script that flows well and actor’s that deliver it flawlessly. Bates is fantastic as usual, but McLaughlin and Franciosi more than hold their own. Howery also brings his combination of humor and heart. Home doesn’t reinvent the wheel but is absolutely worth a watch.