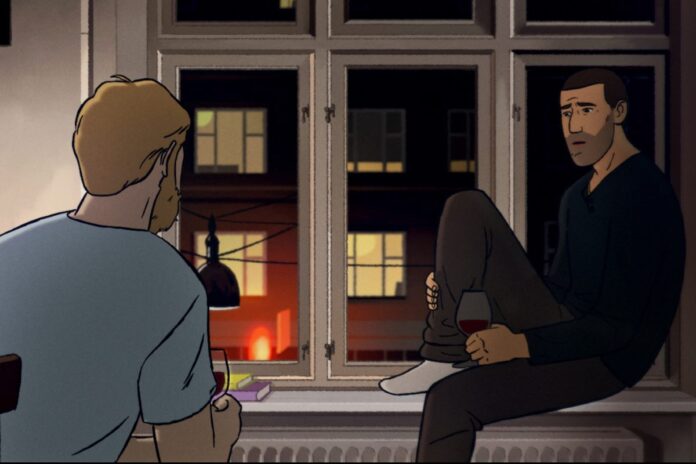 In his latest documentary, Danish filmmaker Jonas Poher Rasmussen keeps his subject’s identity anonymous. Despite this, Flee is easily one of the most personal films of the year.

When we first meet “Amin Nawabi,” a pseudonym created by the filmmaker, he is about to take the next step with his long-time partner. However, something is holding the Afghani immigrant back. Over the next few months, he tells Rasmussen exactly how he arrived from his home city of Kabul to Russia and eventually Denmark in the 90s. Told mainly through recorded interviews with simple animation overtop, we never see Amin’s actual face.

But we don’t need to. Using a non-linear structure, the narrative jumps back and forth through time. Amin is obviously okay, thriving in his career and physically safe in Denmark. However, questions of his father’s death at the hands of the Afghani government, how, if, and who in his family will get out of Kabul and then Russia, keep the suspense going until the very end.

Woven throughout Amin’s immigration story, is his coming out journey. It doesn’t overwhelm the arch of the documentary in the same way a Western documentary might.  There’s a moment where Amin finally is with other family members who have fled Afghanistan. After being pestered by his older brother for still being single despite “Danish girls being beautiful,” Amin finally breaks down and admits that he is gay. With the amount of tension Rasmussen has built throughout Flee, it would seem Amin is doomed to face another obstacle. Instead, what transpires is a sweet moment of relief for both him and the audience.

This brings up Rasmussen’s expert use of tone. He is able to capture the enormous emotional weight of leaving one’s country, leaving one’s family, hiding who you are, and the long-term effects of that on an adult life. Interspersed throughout are moments of levity. From his crush on Jean-Claude Van Damme, to watching Mexican telenovelas in Russian, to the international pull of McDonald’s, Amin’s story reaches past tragedy or soap opera and into relatable humanity.

Produced by Game of Thrones alum and fellow Dane Nikolaj Coster-Waldau and The Sound of Metal’s Riz Ahmed, Flee has received many accolades on the festival circuit. Since premiering at Sundance earlier this year and winning the festival’s World Cinema Documentary Competition, the documentary’s Oscar buzz has only grown. It is rare for a documentary to be placed into more than one category, but Flee could see nominations for Best Documentary, Best Animated Feature, and Best International Feature. With such expert skill and the care that Rasmussen’s team takes to tell Amin’s story, it is pretty much guaranteed his innovative animated documentary will appear at this year’s Oscars.