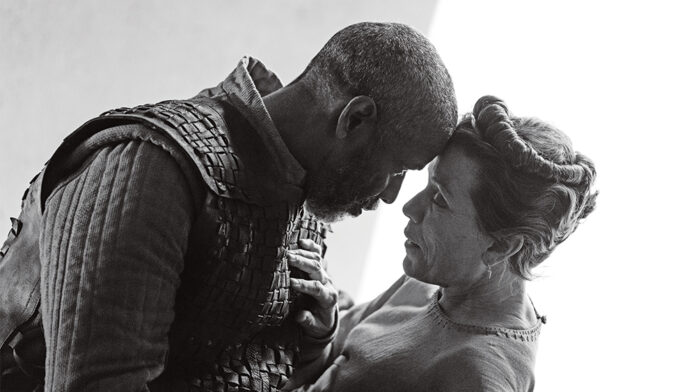 Joel Coen has never directed a feature without his brother Ethan by his side, and yet his film The Tragedy of Macbeth was instantly an Oscars contender because of the casting. You don’t get Denzel Washington and Frances McDormand without awards on the mind, and Coen’s version of the Shakespeare tragedy is looking strong following its world premiere at NYFF.

You know the Bard’s immortal play already, and that it takes on greed, ambition, madness, and murder. It is the ultimate cautionary tale about the corrupting nature of power, and having seen the film myself I can tell you Denzel delivers some epic fury here. We’re talking real “King Kong ain’t got shit on me” type stuff.

A work of stark chiaroscuro and incantatory rage, Joel Coen’s boldly inventive visualization of The Scottish Play is an anguished film that stares, mouth agape, at a sorrowful world undone by blind greed and thoughtless ambition. In meticulously world-weary performances, a strikingly inward Denzel Washington is the man who would be king and an effortlessly Machiavellian Frances McDormand is his Lady, a couple driven to political assassination—and deranged by guilt—after the cunning prognostications of a trio of “weird sisters” (a virtuoso physical inhabitation by Kathryn Hunter). Though it echoes the forbidding visual designs—and aspect ratios—of Laurence Olivier’s classic 1940s Shakespeare adaptations, as well as the bloody medieval madness of Kurosawa’s Throne of Blood, Coen’s tale of sound and fury is entirely his own—and undoubtedly one for our moment, a frightening depiction of amoral political power-grabbing that, like its hero, ruthlessly barrels ahead into the inferno. An Apple/A24 release.