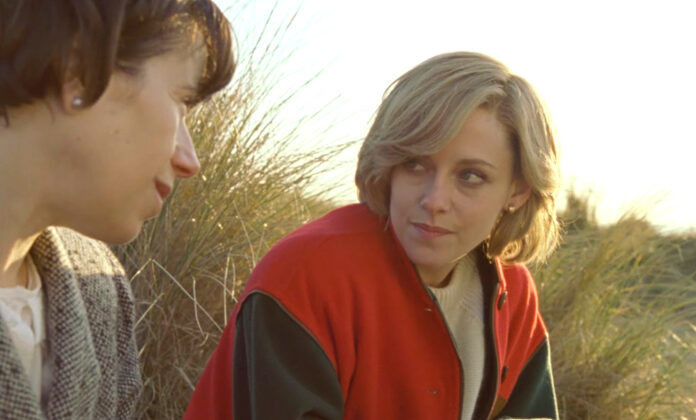 *NOTE: This review was originally part of our Middleburg Film Festival coverage. Spencer opens in theaters on November 5th.*

Right from the beginning of Chilean director Pablo Larrain’s latest white bird in a blizzard drama, Spencer, we know this isn’t remotely a fact-based account. Described as a “fable based on a true tragedy”, the film doesn’t tell the expected princess story at all. Contained to a Christmas weekend in 1991 at the Queen’s estate, Diana struggles with her marriage, now basically a shame, to Prince Charles (Jack Farthing), her duties as a mother to boys William and Harry, the stifling confines placed on her by the Crown, and the scandals that follow her around everywhere.

Spencer unfolds as Diana’s descent into madness, with Larrain and screenwriter Steven Knight crafting a heavy-handed psychological drama that reveals nothing about the woman except that she makes a great subject for Chanel ads and music videos. As he did with Jackie a few years ago, Larrain’s cinematic eye is obsessed with the actress more than the person being portrayed. To be fair, the casting of Stewart is a brilliant stroke that pissed off its share of K-Stew haters and devotees of the Royal Family. But it’s also perfect for the kind of artifice on display; pick an ultimate celebrity to play the ultimate celebrity royal. Both women ate up the spotlight while simultaneously hating it and trying to avoid it. Stewart slips easily into the role, immerses herself fully into it, and emerges with the best performance of her career, and that’s coming from someone who has admired her work for years.

The film begins with a convoy of armored military trucks carrying crates that one would think contain weapons of war. Instead, they turn out to be boxes of food, ingredients for a lavish supper prepared by a chief (Sean Harris) who runs his kitchen like a brigade. Spencer pinpoints these ridiculously oversized preparations as part of the problem that keep Diana feeling hemmed-in. Every detail of her life is micromanaged; from the outfits she wears during the day to whether she can keep her curtains open or not. A creepy Timothy Spall lurks constantly as a castle watchman, quietly suggesting to Diana that she maintain traditions so as not to embarrass the Queen, then narc-ing on her when she doesn’t. She has no control over anything, even if she simply wants to visit her childhood home. It’s all impossible.

So it’s no wonder she has so few friends, other than the aforementioned chef and her tailor, Maggie (Sally Hawkins, comforting as always), who flits in and out ambiguously. Knight’s script places these people there as a contrivance so that Diana has someone to talk to that isn’t the ghost of Anne Boleyn or a scarecrow standing where her family home used to be. Spencer leans hard on what we know is to come, six years later, but that is not enough to carry a drama that engages in so many flights of fancy.

Diana, chronically late or lost, even in her own neighborhood, is always lagging behind the others, prancing about in rooms they have just left, or stuffing her face with food late into the night. These moments are where she finds happiness, the little bit of freedom that she craves. And Stewart, luminous as ever, captures these moments of openness and awakening wonderfully, creating her own version of the woman free from blatant caricature. Shot in a variety of close-ups by DP Claire Mathon, Stewart’s sorrrowful gaze an amplification of similar performances in films such as Personal Shopper and even Camp X-Ray to a certain extent. The combat experience perhaps helped Stewart in playing Diana, whose life must have felt like a constant battlefield.

With a soaring Jonny Greenwood score that ranks among his best, and is likely to be an Oscar contender, Spencer swells to one obvious conclusion, before lingering into a Kentucky Fried bit of foolishness. It’s a fittingly foul ending to a film that succeeds only in going against the grain, much as Diana did. Except where she did so and left an indelible mark and millions of adoring supporters, Spencer will be looked at as that odd Princess Diana movie that Kristen Stewart was really great in that one time.