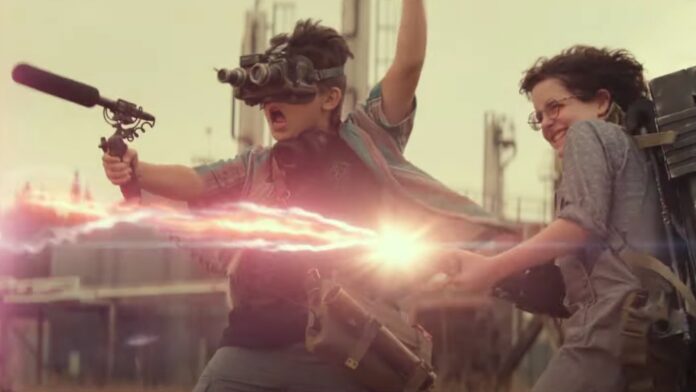 I’ll be honest; Ghostbusters: Afterlife hasn’t interested me all that much. As a kid I roared with glee at the cool Ecto-1, played Peter Venkman (because he was the coolest) with my friends when we would reenact scenes from the classic movie, and even thought its sequel was better than the ravaging it got from critics. But Ghostbusters hasn’t stuck with me over the last 30 years; not much, anyway. At least until the 2016 movie that, sadly, got railroaded because *gasp* it had a bunch of chicks busting ghosts. How dare they!!?? Jason Reitman’s movie sorta had an uphill climb with me, and I went into it hoping that at the bare minimum it should be fun. Just give me that. Well, not only is it fun, but it’s a perfect balance of the nostalgia we all crave while moving Ghostbusters forward so a new generation can ask “Who ya gonna call?”

Reitman, the son of original Ghostbusters director and longtime steward Ivan Reitman, had a difficult challenge in front of him. What made the previous films work wasn’t anything to do with ghosts; it was how much we loved watching those actors and the chemistry they had. Granted, they were all comedic heavyweights at their prime, and Reitman doesn’t have that to work with…well, not too much, anyway. So he had to find a new chemistry; different and yet similar, in a new batch of young actors in a completely different era than the 1980s.

Ghostbusters: Afterlife isn’t a rehash of Ghostbusters. It’s set in that world and yes, some familiar faces turn up, but it’s also its own movie with its own feel. Far from the hustle, bustle, and mean-spirited mojo of Manhattan, this one takes place in sleepy Summerville, Oklahoma. This place is like a land out of time; it has a ’60s-style diner as the central hub. The schools still use VHS tapes to show students movies. There’s an actual hardware shop that looks like it’s being run by a guy (that guy is actually one of the movie’s many cameos) out of his garage. It’s here that Callie (Carrie Coon) takes her two kids, 15-year-old Trevor (Finn Wolfhard) and 12-year-old genius Phoebe (McKenna Grace) after being evicted from their home. She’s been left a rundown old farmhouse by her estranged father, who may or may not have a connection to the original Ghostbusters. H er dad was known around town as the local crank and “dirt farmer”, who talked about wild apocalyptic conspiracy theories and doomsday scenarios. Frankly, there’s not much to do in a place like this but get into trouble.

I love this setting so much, and can’t help but think it was the brainchild of co-writer Gil Kenan. Kenan previously directed the incredible animated film Monster House, about three kids in a boring suburb who get into trouble messing around with a haunted house. Summerville, while different in most ways, is similar in that it feels so far away from the real world. With not much in the way of technology or places to go, it’s inevitable that a couple of outsiders like Trevor and Phoebe would stumble upon some old Ghostbuster equipment, the classic trap, proton pack, and even a broken down Ecto-1.  It’s just in time because a series of earthquakes in town is just the tip of the iceberg of a supernatural threat that could destroy more than the local diner.

McKenna Grace’s Phoebe, with her social awkwardness, shock of hair and spectacles, is very Egon-esque in her appearance and demeanor. She’s also the driver of the action, which gives me a great deal of satisfaction knowing the toxic dudes who hated on the female-led movie in 2016, and thought Reitman would “hand the movie back to” them must still deal with the brilliant Phoebe, who is as fearless as any original Ghostbuster. The tone of the film is very much in the Stranger Things mold, with Phoebe joined by her new friend Podcast (Logan Kim) who has a conspiracy theory podcast that he can’t stop talking about. In a way, he’s sort of like the Ray Stantz of the group. If we wanted to push the comparisons further, Trevor’s attempts to win over co-worker Lucky (Celeste O’Connor) sorta put him as the group’s Peter Venkman. I guess that would make Lucky the team Winston; not only is she African-American but a little more down-to-earth than the rest. Honestly, she doesn’t get nearly enough attention considering the importance of her role. This is all very broad but the dynamic works and there’s some solid chemistry among the four of them.

I don’t know what that would make Paul Rudd’s science teacher Mr. Gruberson. While the film isn’t overloaded with humor, what there is mostly comes from him either from trying to hit on Callie, or from being terrorized by the cutesy little Baby Puft Marshmallow Men who ransack a Walmart with more Baskin-Robbins ice cream than your typical product placement can hold. Rudd is a natural for Ghostbusters, though, and the only disappointment is that he doesn’t get to suit up himself.

It’s unfortunate that in terms of the paranormal threat, it’s mostly been there done that. While it’s cool to get some evil throwbacks,  there’s not much new that’s brought to the table and that’s disappointing. A new team of Ghostbusters deserves some new threats more suitable for their ages and experience levels. Let’s just say they need a lot of help when the final battle comes around, and it shouldn’t be that way.

That said, if you’re a fan of Ghostbusters you’ll love the way everything comes together. I won’t give away how the Big 3 return, or the connection between everyone and Egon, but it really is a tearjerker of a moment despite some dodgy CGI. I had a blast with Ghostbusters: Afterlife and want to see it again and what the future holds for the franchise. There’s a wealth of opportunity with this younger cast and with Reitman helping to forge a new legacy. My guess is that Murray has done his bit and won’t come back for more, but Akroyd is a lifer and something tells me that Hudson could be, too. Be sure to stick around all the way through the credits for two really important scenes relating to that. Those who feared Ghostbusters: Afterlife would cross the streams and blow up everything that fans love, can save their fears for the next evil spirit that haunts their home. And when that happens, you know who to call.

Bill Murray Has Joined The MCU As Part Of ‘Ant-Man & The Wasp: Quantumania’