Home News Marvel Review: ‘Eternals’Marvel's Most Ambitious Film Is Also Sure To Be Its Most...
Facebook
Twitter 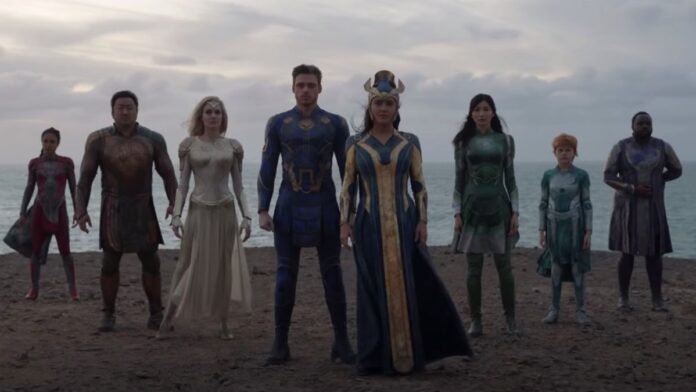 Despite being the undisputed juggernaut of the Hollywood landscape, the Marvel Cinematic Universe spent years being criticized for its homogenous, generic superhero movies. That has changed somewhat lately, but not entirely. No matter what the story, or how large its scope, like say Avengers: Endgame, it is constrained by the needs of the genre. And then comes along Eternals, which boasts the talents of Academy Award winning Nomadland director Chloe Zhao, and arguably the most talented ensemble Marvel has ever put together. With a story that spans thousands of years, employs numerous mythological concepts and philosophical ideas in the midst of a cosmic war between celestial beings, this is Marvel doing bold, ambitious filmmaking like they’ve never attempted before.

And yet, if you asked me if people will like Eternals, my answer would be “no”, even if I personally did.

Marvel has done cosmic before, but never quite like this. Eternals begins with the literal creation of the universe by the gigantic Celestials. The Celestial known as Arishem creates the immortal beings known as the Eternals to protect the planet Earth, forbidding them to interfere in anything unless it is directly connected to the monstrous Deviants. That explains why they have been absent while the planet was threatened by, oh some dude named Thanos. The Prime Eternal Ajak (Salma Hayek), Ikaris (Richard Madden), Sersi (Gemma Chan), Thena (Angelina Jolie), Kingo (Kumail Nanjiani), Phastos (Brian Tyree Henry), Sprite (Lia McHugh), Druig (Barry Keoghan), Makkari (Lauren Ridloff), and Gilgamesh (Don Lee) served in this function for thousands of years, but split up when all of the Deviants were believed defeated. But when Sersi and Sprite, who are living normal human lives in London, are attacked by a Deviant stronger than they’ve ever faced, a reunion is called for.

Eternals is essentially one big gathering, like those episodes of GI Joe where the best part was watching the team come together. So it proceeds pretty slowly as a result, and your mileage will vary depending on how much investment you place in the diverse array of characters and the different lives they lead. To Zhao and her co-writing team’s credit, every Eternal is incredibly interesting, so much so that you wish this could have been a series with each one getting some focus. Sersi, who shared a eons-long relationship with the Superman-esque Ikarus, is now dating human Dane Whitman (Kit Harington), which causes some long-held feelings to emerge. Sersi and Dane, who in the comics is known as the Black Knight, have always been my favorite Marvel couple (Gambit and Rogue a very close second) so seeing them on screen brought a smile to my face even if we don’t get nearly enough of it. The Hepaestus-like builder Phastos has built a family with his same-sex partner and is reluctant to join the fight, especially given that his technological gifts have been squandered by man for centuries. Sprite, forever stuck in a child-like form, resents the others for what she can’t have; the mind-controlling Druid has built himself his own personal cult; Kingo has become the world’s biggest Bollywood star, and so forth. Then there’s the goddess of war herself, Thena, who has seen so many planets destroyed it has fractured her mind. These individual tales add color and depth to Eternals but leave you wanting more. Unfortunately, there just isn’t enough time for it, even if the film does a great job of making each character feel like an important part of the whole. Everyone has their role to play.

But that limitation is something you can see Zhao struggling with. Questions are raised that are barely explored. What does love mean to someone who can live forever? What about mental illness, like the one that afflicts Thena? How does guilt change someone who has been manipulating events for ages? Does war still have any meaning? Does peace? In one scene, Phastos warns Druid that he’s “not a god”…but isn’t he? He lives forever and is all powerful, just as they all are. Aren’t they all gods? Most of them, both in the comics and in this movie, are based on the legendary deities of Greek myth. The physically powerful Gilgamesh is just another name taken by the mighty Hercules.

The needs of a Marvel movie just have to intrude themselves, though. There has to be a big baddie and there has to be a huge final fight. And what a beautiful fight it is! Zhao, who captured amazing natural beauty in Nomadland, brings her cinematic eye to the world of superheroes and it has never looked better. It doesn’t matter whether the Eternals are in the sands of Iraq, in a jungle hut, or firing laser beams and creating magical weapons in battle against the Deviants, Eternals is simply stunning and the best looking Marvel film yet. What Zhao brings is pure poetry for the eyes and I can’t wait to see it all again on the biggest screen I can find.

What holds Eternals back is the sheer size and scope of it. The thing that separates Marvel characters from DC is that they are better the closer they are to the ground. We like them because they are human; we can see ourselves in them. That’s impossible when you’re talking about immortal super-beings who regularly chat with the creators of the entire friggin’ universe. Try as the film might to humanize them, and it does, audiences will find them hard to connect with.

While it ultimately gives in to the demands of the MCU, Eternals strives to be more than just another superhero movie. It’s the reason why it has won me over, and may be the reason why it won’t work for others.