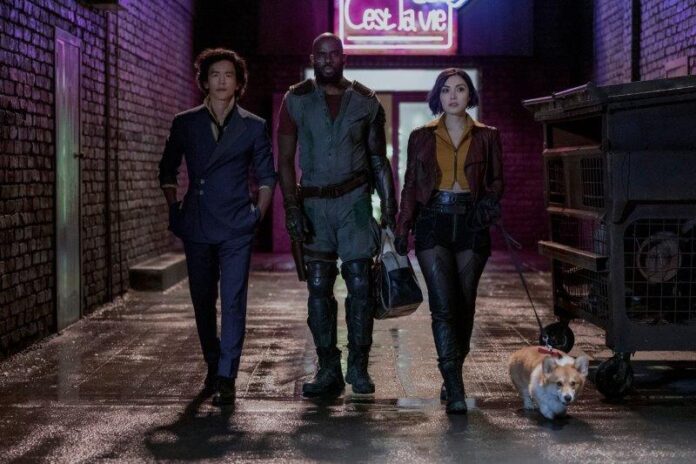 Adapting from one medium to another is always a risky endeavor. Often what works on a comic/video game/cartoon might not always translate well to your TV sets or the big screen. Sometimes, the filmmakers have to dumb it down for a general audience (looking at you The Shining: yeah, I said it!), pissing off the fan base. Other times, you can stick too close to the source material, you end up alienating a general audience (looking at you Zack Snyder’s Watchmen). Needless to say, it’s sometimes hard to strike lightning in a bottle when doing an adaptation, and boy did Netflix have their work cut out for them in adapting Cowboy Bebop.

Cowboy Bebop: the late 90s anime is many Western viewers’ first dip in the pool into the world of anime. Ever since Cartoon Network adapted the sci-fi, neo-noir, western anime as part of their “Adult Swim” lineup in 2001, fans have been loving Spike, Jet, Faye, and other members of the Bebop as they went throughout the galaxy as bounty hunters (or “cowboys” as they are called). The show was literally out of this world and showed us things we simply hadn’t imagined. As a result, Cowboy Bebop developed a cult following. But as stated, this world works perfectly in the world of animation. How would it work as a live-action series?

It kinda does for the most part.

As with the anime, the show takes place in 2071 where interstellar travel is now an everyday thing (thanks in part to an interstellar gateway that has pretty much rendered Earth inhabitable) and mankind has colonized the galaxy. With so much space to work with, the Inter Solar System Police (ISSP) has established bounty hunting as a legit profession. Named “cowboys,” these bounty hunters help capture various criminals throughout the galaxy that elude the ISSP. We get to follow members of a spaceship called “The Bebop.” The Bebop is named of course, after the style of jazz music. Oh, and there is A LOT of jazz throughout Cowboy Bebop, almost too much. I never thought I’d say “tone down the jazz a little,” but the show really loves itself some jazz.

In the Bebop we are introduced to Spike Spiegel (John Cho, who truly has elevated himself to “leading man” status thanks in part to him just oozing charisma on the show) is one-half of a bounty hunting crew. Spike has a troubled past he’s trying to elude that gets completely explored through the show’s 10 episodes as he is associated with a criminal organization called Red Dragon Syndicate (or just “The Syndicate”) who pretty much run the criminal underworld in the galaxy. Partnering with Spike is Jet Black (Mustafa Shakir), a former ISSP cop with his own troubled past who just wants to be a good father to his baby girl (who he can’t see that often because of his past and his need to be a bounty hunter). Both he and Spike are coy about their troubled pasts, which directly affect each other as they go through working through their issues. Joining their crew (after having various run-ins with them) is Faye Valentine (Daniella Pineda), a con-artist-turned-cowboy who reluctantly joins the crew after yet another run-in with them. She also has a troubled past as well. If you aren’t noticing a pattern, they all have troubled pasts, but as they work together (as well as bicker and fight), they find a way to be a cohesive team. Oh, they also have a cute as hell genetically enhanced Corgi!

While at first Cowboy Bebop has an “episode of the week” vibe to it as the crew goes about collecting various bounties and getting into all sorts of battles dealing with various criminals. But there is also an overarching plot as it relates to The Syndicate. Spike’s heel is Vicious (Alex Hassell) a captain in The Syndicate who had a falling out with Spike that led to Spike changing his name from “Fearless” to “Spike” and going underground as a bounty hunter. Vicious is bloodthirsty, cruel, and worst of all: ambitious. Although he’s a legacy in The Syndicate, he wants the crown, and doesn’t want to wait his turn to get promoted. By his side is Julia (Elena Satine), a singer at a local jazz club who is romantically entangled with both Spike and Vicious. At first, she’s presented as some sort of “damsel in distress,” but soon enough we see that she’s more than capable of handling herself as she turns on her inner Lady Macbeth at a moment’s notice. As Vicious learns that Spike/Fearless is out there, he turns his attention on the crew of the Bebop.

Right off the top, Cowboy Bebop is a lot of fun! It lives and dies on the chemistry between the three core crew members. John Cho, Mustafa Shakir, and Daniella Pineda are having an absolute blast playing these roles. Cho is cool as well, Shakir is gruff but loveable, and Pineda is naive and the smartest person on the spaceship at the same time. While it probably is better to be a fan of the original anime, the amount of world-building put into Cowboy Bebop will bring the uninitiated up to speed very quickly. In fact, probably not knowing anything about the original show and its premise might be an added bonus: no additional baggage and expectations that the die-hards will have to go in. As Netflix is trading at $682/share, it’s clear they have all the money on earth and spent a bucketload on the production design and special effects for the series. As this show requires plenty of spaceships to fly in outer space (and VERY close to the ground), the CGI is completely believable. Directors Alex Garcia Lopez and Michael Katleman split directing duties throughout the 10-episode inaugural season to keep things fresh as well.

That said, Cowboy Bebop suffers what some anime adaptations like the Wachowski siblings did when they made Speed Racer a few decades ago. Sometimes capturing the style of anime doesn’t work successfully when doing live-action. While the opening title sequence is a very well-done intro in the same semi-animation style of the original cartoon, other parts of the show feel a little “too cartoony.” There are a few hand-to-hand fight scenes that feel cheap in their presentation, lighting, as well as fight choreography. It feels like they are purposefully hamming it up when it isn’t necessary. Unfortunately, the need to copy the anime style of filmmaking makes the series feel a little too alien in some parts. While the core crew of the Bebop is bringing their A-game acting-wise, Alex Hassell as Vicious comes across as a spoiled wanna-be Bond villain most of the time. The music composing is both a gift and a curse throughout the series. It’s awesome that Cowboy Bebop was able to get the original anime composer Yoko Kanno to come back and do the score, you can get tired of the constant jazz over 10 episodes. The show also doesn’t have the “Netflix binge” feel to it and would probably work better if you take your time to watch it.

That said, Cowboy Bebop is an interesting experiment for Netflix. It, for the most part, accomplishes its goal of adapting a beloved anime for a general audience and sucking you into an intriguing world. It just needs to find a better balancing act between being a show and being a show trying to be anime. They should take notes for their upcoming Avatar: The Last Airbender adaptation and possibly tone it down a little. Less jazz, more dog will be a winning formula for season 2!