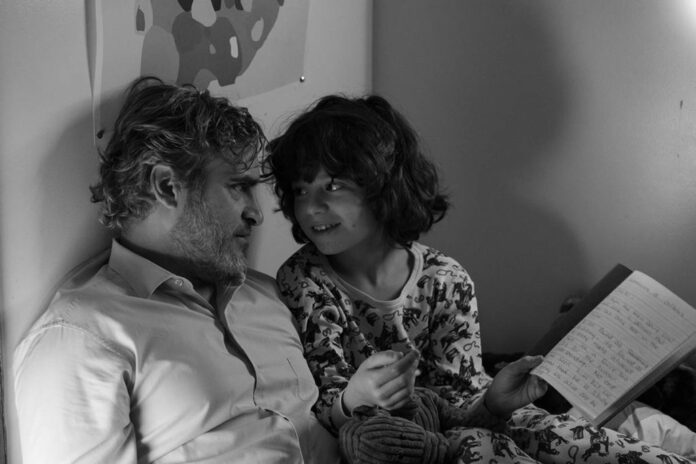 The adult relationships one forms as a child are often the ones that shape us. C’mon C’mon, the newest feature from 20th Century Women director Mike Mills, shows us that those intergenerational bonds are often just as important to the adult and reveal our truest humanity.

Joaquin Phoenix plays an unmarried radio journalist who hasn’t talked to his sister (Gaby Hoffman) or his nephew (Woody Norman) in over a year. On the first anniversary of their mother’s death, his Johnny calls Hoffman’s Viv to check in. She mentions that she needs to go up to San Francisco to help figure out if her estranged husband with bipolar disorder (Scoot McNairy) is in danger.

Johnny offers to take his nephew Jesse for a few days and is basically given a crash course in parenting. Jesse (Woody Norman) is a precocious nine-year old, full of curiosity and his own agenda. He is fascinated by his uncle’s recording equipment. He isn’t afraid to ask uncomfortable questions like where his dad is or why Johnny is single. His feelings are big and black and white, like the movie.

Phoenix permanently leaves Joker behind to play Johnny. It’s his most natural role yet, with a documentary/Cinema Vérité acting style. The chemistry between him and Norman is at the heart of C’mon C’mon and the young actor may be giving the year’s best performance. Both Hoffman and McNairy give brilliant performances as well.

While Mills’ latest venture could be describe as “cute” or “sweet,” he infuses a quiet sad trepidation into the film. As Johnny is forced to take Jesse on the road for work, the two experience the everyday hilarity and pain that comes with raising a child. From Jesse’s pretend orphan character, to running away in public, we see Johnny and Jesse’s relationship get tested and grow. C’mon C’mon is truly a bittersweet film – in every sense of the word.

The film opens with Phoenix asking kids different questions about the future. “What is one thing you’d change about yourself?” “What worries you?” “What do you think the future will look like?” These NPR style interviews are interspersed throughout C’mon C’mon to remind us of the legitimate fears these kids have for their world. Often, as Jessie insinuates, grown ups forget that children are actually people who don’t always want to follow the rules. Mike Mills has given us a gift to help us remember and have some childhood joy for 108 minutes.

C’mon C’mon will be released November 19.