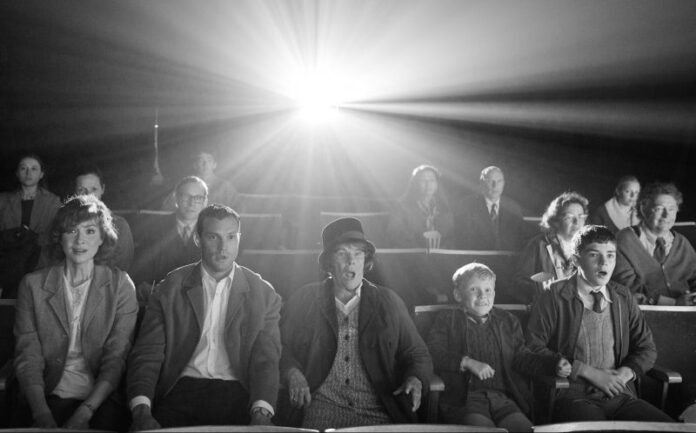 *NOTE: This review was previously part of our Middleburg Film Festival coverage. Belfast opens in theaters on November 12th.*

This has been another year of deeply personal awards season dramas at Middleburg. A couple of years removed from Roma, this year we’ve got Paolo Sorrentino’s The Hand of God and Kenneth Branagh’s Belfast. Of the bunch, it’s Branagh who delivers the most rousing, crowd-pleasing look at his childhood growing up in Belfast, Ireland, at a time of great religious conflict in the 1960s. Coming in at a svelte 97 minutes, the film paints a joyous picture of community that would color the director’s future.

If you’ve seen the trailers for Belfast before, the opening, a colorful travelogue-esque introduction, might come as a surprise. It takes a moment for the black & white scheme to settle in, but when it does we are introduced to Buddy (Jude Hill, a real find), whose bright, smiling face shows his immense love for the people of Belfast. He runs wild in the streets with the other kids, swinging a fake sword and shield. In a place like this, everyone feels like family, and Buddy’s adult neighbors chime in with jokes and warnings that it’s time for him to get home. It’s a place of constant activity, the hustle and bustle of people going about their lives a constant reminder that this is a place full of many stories to be told.

Along the way, Buddy might stop to visit the little girl he intends to marry, or stop off to see his grandparents (Judi Dench and Ciaran Hinds), who have lived there for decades. But the film revolves around Buddy’s love for the people at home: Ma (Caitriona Balfe) and brother Will (Lewis McAskie), and Pa (Jamie Dornan) who is frequently away in London for work. Conflict arises in the clashes between Protestant and Catholic groups, constantly battling with one another on the streets, threatening to turn this friendly place into a warzone. Pa, as someone who refuses to choose sides, has become a target of violence.  But rather than give in to those who would turn neighbor against neighbor, the family must decide whether to stay or flee to London and safety.

Belfast isn’t a particularly deep film as it’s from the perspective of a nine-year-old boy. As insubstantial as certain stretches are, what you do get are the details that only a child would notice because they made him so happy. Despite disputes over Pa’s gambling, Buddy’s parents are lovingly devoted to one another, matching the lifelong devotion seen in Buddy’s grandparents. The adults have their own little love language that a kid might not understand, and they are always in physical contact, showing an intimacy that need not be spelled out. One can easily imagine Branagh’s wide smile as he films these little snapshots, committing them to the screen for eternity.

All of the performances are excellent, but credit goes to Branagh for getting the most out of Hill in what I believe is his first major screen role. Putting a lot of dramatic weight on a kid’s shoulders is always risky business, but Hill is terrific as the adorable, precocious Buddy who is only just beginning to learn of a world outside of his beloved Belfast. While you expect greatness from veterans such as Dench and Hinds, their heartbreaking story forming the film’s most emotional subplot, it’s Balfe as Ma who really takes your breath away as a true rock of the community. Because of her strength and resolve, she refuses to be bullied from the place she holds dear, but must also weigh the safety of her children. And of course, her love for Pa, which Balfe and Dornan make feel real and lived-in. You never get the sense that their marriage has been easy, but that they’ve overcome a lot and come out stronger, more in love than ever.

Branagh and DP Haris Zambarloukos tease the director’s future filmmaking career with splashes of vibrant color. As the family goes to the movies to see One Million Years B.C. and Chitty Chitty Bang Bang (which leads to a burst of song you might want to join in on), suddenly Buddy’s world becomes a lot more colorful and wide open. Westerns such as High Noon and The Man Who Shot Liberty Valance break through as influences on Buddy and his Pa. Look out also for a quick appearance by Thor, doing more to explain Branagh’s brief Marvel stint than all of the interviews he could ever give.

Is Belfast the Best Picture frontrunner that many claim it to be, though? Of that, I’m not so sure.  It could use a bit more meat on the bones, and I’d be lying if I said the deep Irish accents are always easy to understand. Subtitles would have been handy, especially with the busy Belfast streets buzzing in the background. What’s inescapable is Branagh’s passion for these characters, this place, and this moment in his life. That feeling is infectious, and Belfast will have you beaming when the credits roll.