Mateus (Christian Malheiros) is an 18-year-old from Catanduva, a town in the countryside of Brazil. He has a loving family and seems like he was raised right. Mateus is compassionate, intelligent, and respectful. He aspires to go to college and become an engineer. His mother is getting older, but still works in the fields to provide for Mateus and his siblings. Mateus wants nothing more than to give his family a better life. When an opportunity arises to earn good money at a new job in São Paolo, Mateus jumps at it. Thinking that this may finally be the break his family needs, Mateus doesn’t hesitate to blindly head to São Paolo. Mateus quickly gets dragged into a seedy world that he didn’t know existed in 7 Prisoners. 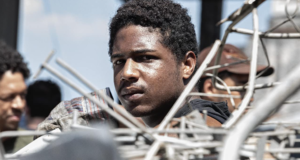 Mateus is accompanied by his friend Samuel (Bruno Rocha) and a couple other teenagers from his area – Ezequiel (Vitor Julian) and Isaque (Lucas Oranmian). A recruiter named Gilson (Maurício de Barros) brings them to a scrapyard in São Paolo where they meet Luca (Rodrigo Santoro). Gilson promised that their housing and food would be provided, and that they would have honest work with a proper contract. After a week of working long hours in the scrapyard with no pay, Mateus begins to question the legitimacy of the operation. Luca quickly turns from appreciative, welcoming, and kind to abusive and violent. As the boy push back, Luca begins to take away basic privileges. First phones, food, and showers…and eventually their freedom. 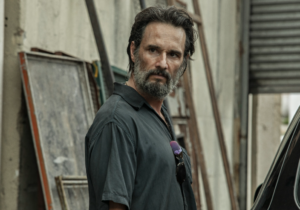 7 Prisoners is the second feature length film from director Alexandre Moratto who also co-wrote the film with Thayná Mantesso. Moratto is an up-and-coming director with his debut, Socrates, receiving critical acclaim. He has a connection with Mantesso and Malheiros as he collaborated with them both on Socrates as well. Moratto and Mantesso cowrote the script for both films and Malheiros stars in both. This connection allows Moratto to fully utilize Malheiros’ range and abilities as an actor. They are in no short supply in 7 Prisoners. 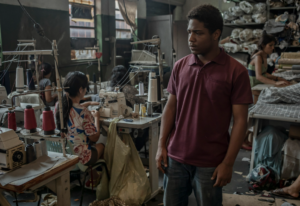 Malheiros brilliantly showcases the transformation within Mateus. His facial expressions clearly displaying the emotions and turmoil inside of him. As the situation becomes more desperate, Moratto increases the intensity from behind the camera in lockstep with Malheiros in front of it. Equally impressive is Santoro’s performance. Luca is a phenomenal antagonist. Moratto shows how quickly relationships can form, both positively and negatively. Santoro perfectly captures this range and plays with the audience’s emotions while doing it. He manages to repeatedly invoke anger, pity, and compassion from the audience throughout the film. 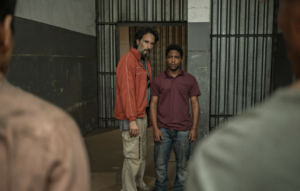 The scariest part of 7 Prisoners is how real the film is. One could so easily see how something that looks legitimate enough can turn sinister in the blink of an eye. With the right money, connections, and corruption – less fortunate people can be taken advantage of and cornered. 7 Prisoners plays eerily like a documentary, and that is no coincidence. Moratto employs close ups of faces and unique camera angles throughout to build the connection with the audience and the characters. He succeeds in shedding light on these poor people around the globe. Moratto’s excellent direction combined with a strong script and excellent performances by the cast – led by Malheiros and Santoro – make 7 Prisoners a must watch.