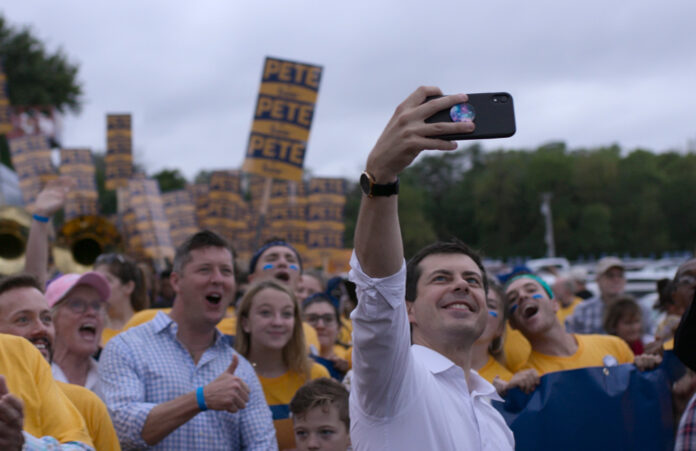 I had the pleasure of interviewing Director Jesse Moss in discussing his upcoming documentary film, Mayor Pete that is set to be released worldwide on Amazon Prime, November 12th. Read along and hope you all enjoy our Q & A’s.

Hi Jesse and thank you for meeting with me: could you tell us a little about yourself and what other work/projects you’ve done before?

Hi Jen, pleasure to meet you. I have co-directed with Amanda McBaine on another documentary film that premiered in 2020 called Boys State. The film documents 1000 teenage boys in Austin, Texas that come together to build a representative government from the ground up, from all different political backgrounds, navigating challenges of organizing political parties, consensus, and campaigning for the highest office that depicts political divisions. The Overnighters is another documentary that was made in 2014 about broken men who desperately chase their dreams while dealing with hell in the North Dakota oil fields. There’s a local pastor who puts himself at risk to help these men. I have also done some work with Netflix that includes contributing to episodes for two of their series, The Family and Dirty Money.

Boys State premiered at the 2020 Sundance Film Festival and is listed as one of Former President Barack Obama’s favorite movies of 2020. The film was awarded the Grand Jury Prize and released by Apple Original Films and A24. The Overnighters was awarded the Special Jury Prize at the Sundance Film Festival and later released by Drafthouse Films and Netflix. Moss twice has been nominated by the Directors Guild of America for Outstanding Directorial Achievement.

How did you come across/meet Mayor Pete and what inspired you to create a documentary about him and his mission?

I was genuinely intrigued by Buttigieg. He had a remarkable composure, evident intelligence, and a gift for conveying complex ideas in ways that felt graspable. I reached out to friends and colleagues like co producers Dan Cogan and Jon Bardin who come to find out, had also shared my interest in Buttigieg. We reached out to his campaign to test the waters about filming a documentary. Pete had the appeal to be a rising star in the Democrat Party as this young man in South Bend, who was elected mayor and had an unusual but highly intelligent background. He was able to address important questions about our country in ways that I connected with. The opportunity to have access to a presidential candidate was very enticing.

What was it like working with Pete, Chasten, and his campaign team?

Everyone was great. Pete is more quiet and reserved. He is focused and very much a deep thinker. Chasten is relaxed and has more of a comedic tone that perfectly compliments and balances the two. Pete’s advisory team is a solid team that were not afraid to be real with him. Having made political documentaries before, it can feel like you’re seeing a façade, especially being a huge presidential campaign where the stakes are set really high. What was exciting about the project was the idea that Pete was going all in. His campaign was small AND he’s considered an outsider; with him betting it all in an unorthodox way and his team was willing to let us film it, we seized the opportunity.

What is your goal or what do you hope to accomplish with filming Mayor Pete?

I want young LGBTQ+ people to see this film and understand that there should be no limit to their ambitions as Americans, and there should be no limit to their participation in the American mainstream. Pete is a guy who hid the fact that he was gay, or didn’t want to believe that he was gay, and you see that it’s only when he comes to terms with being gay that he really flourishes as the statesman that he’s become. It’s an important message to LGTBQ+ youth about their place in America. I also think it’s a great story about public service and the people who devote themselves to public service and the price, difficulty, and exhaustion of that, and yet also the incredible public value and importance of that. If those two things can be takeaways for the film, I will be very happy. Pete himself is this remarkable beacon of pure service to community and country. It’s an inspirational thing to watch.

Were there any surprises or anything that stood out or resonated with you while filming?

With all that he was confronting and dealing with in this campaign, and all the people that he had to answer to and satisfy in different ways, that he would have the bandwidth for this project, and I think that I really expected that to be much more difficult. He was pretty patient with our process, and open, and Chasten too. We expect our politicians to be extremely guarded. Pete is guarded and I think there are parts of himself that he needs to protect. But Pete wasn’t playing to the camera, I never felt that. I felt this was a radical transparency. Chasten is amazing. He’s an integral part of Pete’s partnership on so many levels and is at more often times, surprisingly funny. They have great chemistry and it really shows.

Chasten is noticeably monumental to Pete and his campaign-how do you think he’s impacted them both and do you think or do you have thoughts on him potentially being America’s First Gentleman?

I’m intensely proud of the story we could tell about Pete and Chasten and this improbable campaign, and the conversation it opens up about presidential campaign politics. Chasten’s love for Pete, his sense of humor, and genuine compassion for people is a great asset for First Gentleman. We see personal characteristics of Pete in some ways through Chasten’s view and understanding of him. And I believe it captures with positive rapport and immediacy an important chapter in LGBTQ+ political history books.

Why should people watch your film, and do you have anything else you’d like to add about it?

The fact that a young, gay mayor from South Bend, Indiana, could launch and improbable but incredibly successful campaign for president, not as a lark but because he has something to say and because he has an incredible gift of bringing people together. People are looking for political leaders who can heal wounds and find practical, pragmatic, thoughtful ways forward to confront these existential problems. This is a story about somebody who is trying to do that. You see issues of race come up in very painful ways in the film, and that’s part of what he was confronting himself and the legacy of policing in his city. I think the film deals with most of those questions he faced. We really dug in and learned that he was still in his 30s, was happily married, and had been reelected by a higher margin after he came out. It was this bigger story to tell about America changing and how he represented that in a town like South Bend, Indiana. Separate from the campaign, Pete felt like an interesting as well as optimistic story to tell.