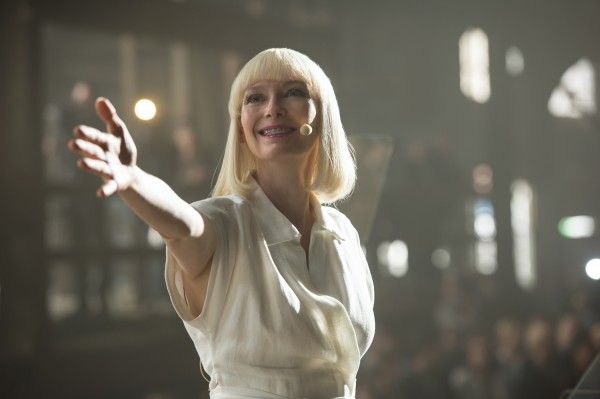 Joshua Oppenheimer is known for his two unforgettable documentaries on the nature and legacy of violence, The Act of Killing and The Look of Silence. He hasn’t directed anything since, however, and now he’s returning with his first narrative feature, and surprisingly it’s a musical starring Tilda Swinton, Stephen Graham, and George MacKay.

NEON has announced they’ve acquired the rights to The End, and while details are scarce it already sounds interesting. The film will star Swinton, Graham, and MacKay in a “golden age musical about the last human family”.

What does that mean? Is this some post-apocalyptic scenario? Perhaps all that’s left in the world are robots except for these people? Who knows? I’m intrigued, especially since this is a genre Oppenheimer’s never done before as a feature.

The cast Oppenheimer has put together is excellent, too. Swinton will be seen next in The French Dispatch, and recently shot George Miller’s Three Thousand Years of Longing. She’s currently filming Wes Anderson’s new film in Spain. Graham can be seen right now as Detective Mulligan in Venom: Let There Be Carnage. MacKay is best known for his incredible performance in 1917, and will be seen in Wolf later this year.

Production on The End begins in early 2022.

‘Memoria’ Trailer: NEON Confirms Nationwide Tour For Apichatpong Weerasethakul’s Drama That Will Only Be In Theaters