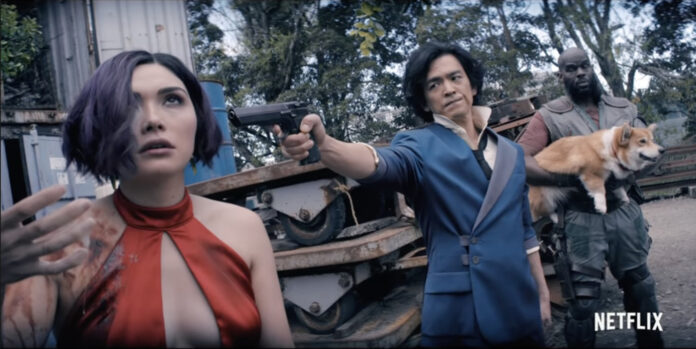 Netflix has finally moved past the slick opening numbers and cool short movies, and finally released a proper trailer for their live-action Cowboy Bebop. The footage was revealed last night as part of a live fan event with appearances by stars John Cho, Daniella Pineda, and Mustafa Shakir.

For all of the hip action and stylish presentation we’ve seen so far, the opening moments of this trailer skew towards the downbeat. We see Cho as Spike Spiegel, leader of a ragtag group of bounty hunters aboard the eponymous ship, as he shoots the shit with his old friend Anna, played by Tamara Tunie. Spike talks about his past, what he used to be, and where he’s going now…which is into a whole lot of trouble.

The kinetic, comic book-style action we’ve seen previously is back, along with our first look at Ein the corgi! Yeah, this is gonna be a blast, and hopefully it’ll be perfect to fans of the anime and newcomers who just dig how fun this looks.

COWBOY BEBOP is an action-packed space Western about three bounty hunters, aka “cowboys,” all trying to outrun the past. As different as they are deadly, Spike Spiegel (John Cho), Jet Black (Mustafa Shakir), and Faye Valentine (Daniella Pineda) form a scrappy, snarky crew ready to hunt down the solar system’s most dangerous criminals — for the right price. But they can only kick and quip their way out of so many scuffles before their pasts finally catch up with them.