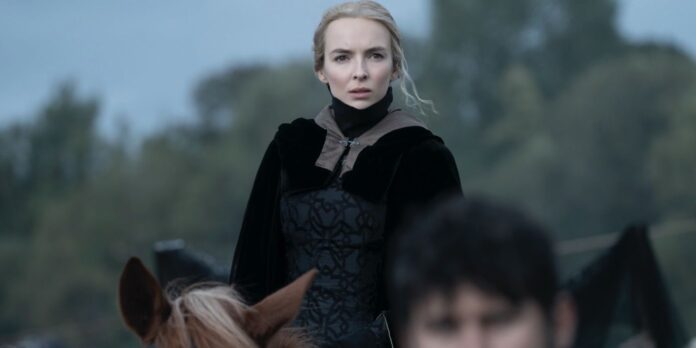 Ridley Scott doesn’t get enough credit for the sheer diversity of his filmmaking. The same guy who gave us Alien and Blade Runner also is among the best at brutal medieval  period pieces. And that certainly is the true for his latest,  The Last Duel, which is bookended by breathtaking swords ‘n armor clashes, leading you to believe this is what the movie is going to be. And if it were, that would be great because we know Scott can do it. But what we get is surprisingly much more, a nuanced look at patriarchy and power and royal politics and how it all comes crashing down on women, or in this case, one woman played by the extraordinary Jodie Comer.

While it’s Matt Damon, Ben Affleck, and Adam Driver who bag all the headlines for The Last Duel, it’s Comer who is the actual centerpiece and the showstopper. Ironically, the notice they’re getting over her sorta validates the entire theme of the film, which is that women have always been subjected to the will of men, no matter how flawed they might be. Based on a true story in 14th-century France during the time of King Charles VI, the film follows a Rashomon/The Handmaiden look at a single event, the rape of Marguerite de Carrouges (Comer) by accused attacker Jacques Le Gris (Driver), the best friend of Sir Jean de Carrouges (Damon), a headstrong knight who has fallen out of favor with the hedonistic Count Pierre d’Alencon (Affleck) who instead favors Le Gris.

Penned by Damon and Affleck, their first together since winning an Oscar for Good Will Hunting, the film makes no bones about the time period and how dangerous a time it was. A plague has swept the kingdom and sent Jean into ruin, while at the same time his supposed best friend is reaping the benefits of his downfall. Le Gris claims Jean’s familial inheritance, but also the dowry owed to him for marrying Marguerite. Ultimately, he also takes Marguerite, with or without her consent. That they had sex at all is never in doubt.

Telling the same story three times has its challenges, but it’s to the credit of everyone that each brings something new to the table. Subtleties in the performances and dialog add new wrinkles, with each version showing a character in a different light. Damon’s role is particularly tricky; what looks like an act of honor and loyalty in one telling looks like arrogance the next. He stands as a righteous servant of God and the King, but also something of a party-pooper with a chip on his shoulder. He’s bled and nearly died for France, and feels he hasn’t gotten all that he deserves for it. His negative qualities are heightened in subject retellings, with Le Gries putting shine on himself. The interesting thing about Le Gries is how little he denies; he admits to being a womanizer, for lusting after Marguerite, and even for seeing the benefit of Jean’s downfall although it’s purely coincidental.

The nuances are subtle and profound, and this is especially true when Marguerite’s version of the story is told, “the truth” vanishing into smoke as her chapter begins. Comer is incredible here, as she’s largely just part of the decoration in the sections focused on the men. One could easily feel, given Ridley’s history of male-focused epics, that The Last Duel would leave her as the side piece to the guys’ rivalry. Instead, she bursts forth as the only one offering any real humanity, and an honest appraisal of the way men, all men, treated women like property or sexual objects. Even the ones who seemingly mean well, like Jean, put their personal pride ahead of a woman’s justice. For women, redress for a crime such as rape is unheard of. Jean is seen as the aggrieved party, with Marguerite the damaged property. Worse, if Jean loses the duel it’s her who will be executed for committing perjury.

While this is serious dramatic storytelling for the most part, The Last Duel can also be quite funny and I’m not sure it’s always intentional. Damon’s performance is so grim, with that ugly starfish scar on his face so loudly visible, that you want to laugh even louder at his shaky accent. Affleck goes full-blown camp as the Count, his voice reaching Bozo high levels as he asks Le Gries which pair of shoes is best: the silver or the gold. It’s the gold, of course. Driver is a charismatic force exuding knightly energy, but he’s also a bit of a ham. It’s like the men are here doing an Arthurian sketch comedy and they forgot to tell everyone else.

It’s Comer who really classes up the joint, and like Marguerite, she refuses to sit quietly in the shadows while the men get all of the attention. She totally owns this movie, and that makes it disappointing her story gets the shortest amount of time and that so much of it is spent unnecessarily on the rape. The Last Duel misses the mark by not giving Marguerite even more of a voice just because Comer is so good you can’t turn away from her.

The Last Duel concludes with a clashing of swords well worth the 152-minute runtime. This is Scott in true Kingdom of Heaven mode, showing the grim reality of trial by combat, free from the glamorous flourishes Hollywood often puts on knight battles. And because of the compelling, complex storytelling that preceded it, every swing of the sword or thrust of the joust has so much added emotional weight. Honestly, I prefer this Scott to the director who gives outsized theatrics like this than stuff like All the Money in the World or his upcoming House of Gucci. When Scott goes epic-scale there are few better. He’s one of the last filmmakers I’d expect to be able to pull off a period “Me Too” blockbuster but The Last Duel shows that Scott is still at the top of his game.

The Last Duel opens in theaters on October 15th.