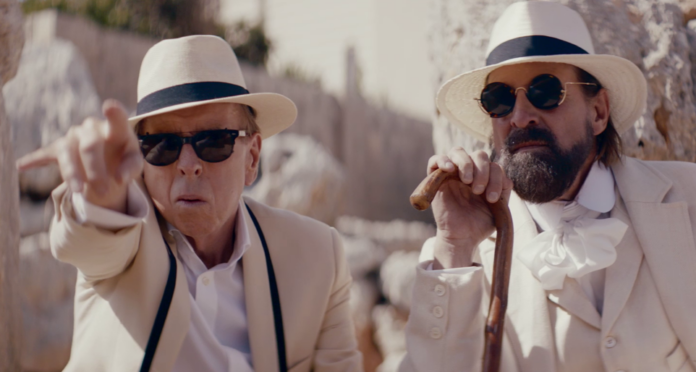 Alfred Rott (Timothy Spall) is a world renown architect in The Grand Duke of Corsica. His unique abilities and vision make him highly sought after. He’s able to pick and choose projects as he’s wined and dined all over the world. Even though he may be living a dream life to some, he seems like he couldn’t care less. To sum it up, he’s a prick. He has no filter, doesn’t care in the slightest about others, and acts like the smartest person in the room. Not to mention he’s crude, sexual, and vulgar. Although his reputation proceeds him, both positively and negatively, people put up with him. The quality of his work and the allure of his reputation is enough, and he knows that. 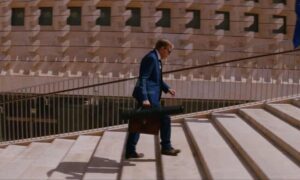 Rott gets drawn to Malta by a billionaire who refers to himself as the Grand Duke of Corsica (Peter Stormare). The Duke has quite the unusual request but will do anything to have Rott fulfill it. He wants Rott to design a mausoleum for him. Rott initially tries to turn down the request, but the Duke refuses to take no for an answer. If Rott is going to take on the project, he feels like he must get to know the Duke better and spend more time with him. While the two are going back and forth about the project, Malta is experiencing a rise in Malaria. A new aggressive strain is sweeping the country and infecting many. Of course, a silly thing like Malaria isn’t going to stop Alfred Rott.

The Grand Duke of Corsica is writer and director’s Daniel Graham’s second feature length film. Graham’s feature length debut, Opus Zero, was also a complete brainchild of his with him writing and directing as well. Taking on both roles allow him to truly fulfill his vision. That also means he gets most of the praise, and most of the blame. In the case of The Grand Duke of Corsica, it’s the latter. Graham doesn’t fully develop the characters and gives the audience no reason to connect with them. The script, however, has its moments. There is a wide range in the jokes – from extreme subtlety to in your face humor. There’s some wit, but before you know it, it devolves into potty humor (literally, poop is a reoccurring theme).

Graham tries to interconnect two stories, both occurring in Malta. The first taking place in the early twelve hundreds and the other in present day. At first, the juxtaposition of these two stories is curious, but Graham cleverly manages to tie them together. However, it fails to deliver with one story line tapering off and not reaching its full potential. Various characters drift in and out of The Grand Duke of Corsica from Lucy (Noeleen Comiskey), a potential love interest angling for an interview, to Leos (Matt Hookings) a self-loathing actor. Yet none of them stick around enough or leave a lasting impression. Graham employs title scenes throughout the film to separate it into chapters. While this can be a useful tool to progress the narrative, in this case, they appear disjointed. The Grand Duke of Corsica had potential, but it quickly unravels as the film progresses. A small group may be able to overlook the film’s faults, but a majority should go ahead and pass.