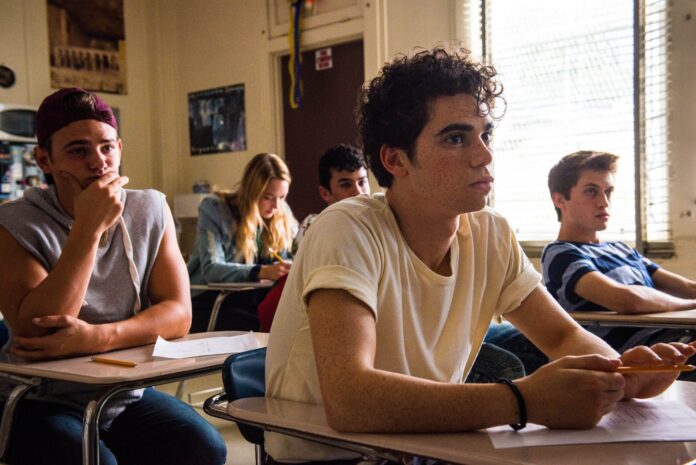 Runt tells the story of a group of neglected and misguided high-school seniors who are pulled into a downward cycle of violence when the adults in their lives fail them. Cameron Boyce portrays Cal, a high-school teenager, who after a troubling incident takes a stand that results in devastating consequences. This indie and psychological thriller stars Boyce, the star of Disney Channel’s Descendants franchise, Jessie, HBO’s Mrs. Fletcher, and the Grown Ups movies just to name a few. Alongside Boyce co-stars Nicole Elizabeth Berger (Clover), Aramis Knight (Into The Badlands), Brianna Hildebrand (Deadpool 1 & 2), Cyrus Arnold (Run Hide Fight), Jason Patric (The Vanished), Charlie Gillespie (Julie and The Phantoms) and Tichina Arnold (The Last Black Man in San Francisco). The film marks the directorial debut of William Coakley, based on a script by Coakley, Christian Van Gregg, and Armand Constantine.

In Runt, Cal (the late Cameron Boyce) is an innocent and smart kid of a single parent who looks after a stray dog he’s taken in. He has a long time crush on popular girl, Gabriella (Hildebrand) but is too shy to confront her about his feelings. Her boyfriend, D-Rat Ronnie  is a highly protected football player and a well-known bully. When D-Rat Ronnie finds out that Cal has a crush on Gabriella, he and his football friends start harassing and abusing Cal at school. At first, Cal tries to ignore the bullying and avoids telling any adult for fear of making matters worse. Then, when the bullies confront Cal at a party, shove him in the trunk of a car, and sexually assault his friend Cecily (Nicole Elizabeth Berger) Cal decides to retaliate. The torment escalates when Cal and the bullies proceed to engage in a series of one-upping, with each form of retaliation growing darker and more violent than the last.

Runt is a beautiful final masterpiece from Cameron Boyce. A psychological thriller full of dark turns and true mental anguish. This young and brilliant cast portray their characters wonderfully as they give believable insight to their world of showing how they fend for themselves. The adults in Cal’s and the other student’s lives, including parents and teachers, are either absent or terrible role-models. This leads to bad behavior and choices that spiral into intense, deadly, and all too real reactions and situations. Youth, innocence dramatically slip away as these teenagers take matters into their own hands and fight their way through some real life drama and shitty scenarios. Boyce is an absolute pleasure to watch. It’s crystal clear that he poured his heart and soul into a film and character for a belief he felt so strongly about. He truly is an incredible talent that will be missed. Runt is a must film see for sure!

‘Playing With Fire’ Trailer: John Cena Is A Firefighter Who Has Met His Match

Review: ‘Deadpool 2’ Is The Overstuffed Chimichanga Of Awesomeness This Summer Needed

‘Deadpool 2’ Trailer: Deadpool Gets Some X-Backup