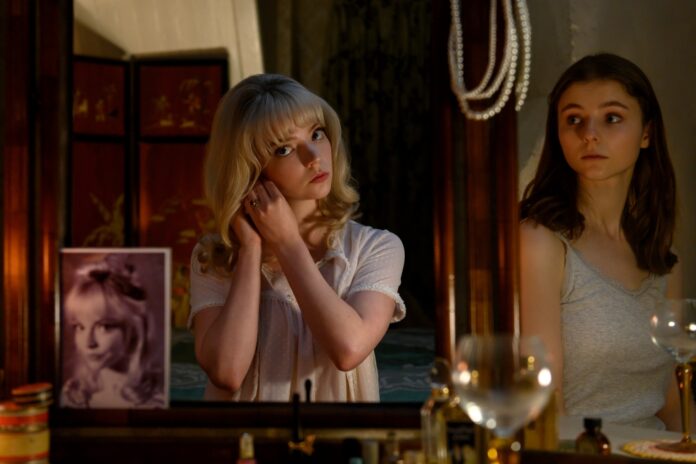 After taking the horror genre for a comedic spin in cult classic fashion with Shaun of the Dead, Edgar Wright goes full-blown psycho terror with the stylish ode to swingin’ ’60s London, Last Night in Soho. A little bit kitschy, just like the Brit era the film so lovingly, and ominously depicts, it finds Wright using music to tremendous atmospheric and narrative effect just as he did with Baby Driver. It’s amazing how Wright continues to improve from project to project, and with Last Night in Soho he’s at his absolute best while attempting something he’s never done before.

While set in contemporary times, Last Night in Soho owes a lot to the British Invasion period of the late 1960s. The style, the music, the fashion melds into the present through the perspective of Eloise Turner (a terrific Thomasin McKenzie), who is obsessed with London of that era. She digs the albums, loves the clothes, everything about it, encouraged by her grandmother Peggy (Rita Tushingham). Eloise doesn’t really fit in, and occasionally sees the reflection of her mother, who died after being “overwhelmed” by what London had to offer. So Peggy is justifiably worried when Eloise heads there herself to study at a prestigious fashion design school.

Upon arrival, it’s clear Eloise is in over her head. She quickly makes enemies of her bullying roommate who doesn’t understand this naive new girl and her antiquated tastes. So Eloise moves out and into an apartment run by landlady Ms. Collins (the late Diana Rigg), only to discover that her room once belonged to Sandie (Anya Taylor-Joy), an aspiring singer in the ’60s who lived the lifestyle she always imagined. Soon Eloise begins to have visions of Sandie, and living the same life through her eyes. It doesn’t take long before she learns there was something sinister lurking underneath the glamour, especially for hopeful young women who were at the mercy of men who controlled their fates.

The swingin’ ’60s have been satirized to death in the Austin Powers comedies but Wright presents a dazzling look full of big, flashy setpieces and odes to the music, the movies, the clothing, the dances, the drugs. What begins as a love letter eventually turns nightmarish as Wright pulls back the veil to expose the harsh realities for someone like Sandie. Her abuse at the hands of many men, primarily her lover Jack (a chilling Matt Smith) is captured in the most gruesome images Wright has ever brought to screen. There isn’t a ton of gore, but the most disturbing scenes involve Sandie and the ways in which she gets used up by those eager to exploit her, sucking the youth out of her like vampires. Her innocence mirrors Eloise’s as they both seek to break into London’s most elite social circles. A running gag about how dangerous London can be starts off funny, but eventually takes hold as a grim warning.

Enlisting the aid of co-writer Krysty Wilson-Cairns (of 1917 fame), Wright’s first film with a female lead is a smashing success. He couldn’t have chosen better actresses to lead it. McKenzie continues her streak of winning performances in everything from Jojo Rabbit to Old and soon-to-be in The Power of the Dog. Her Eloise is incredibly naive but so likable it pains you to see London chew the shy, quiet girl up. Taylor-Joy on the other hand is on the opposite end of the spectrum. Her Sandie is a livewire of energy and the life of the party. She gets to show off in a great singing performance of “Downtown”, followed by a series of increasingly wild dance scenes. Sandie’s evolution has her losing that spark and becoming more withdrawn, which Taylor-Joy, who I think often comes across as detached, depicts with natural ease.

Further showing his love of the era, Wright filled the supporting cast with a number of ’60s icons in substantial roles. Rigg, forever remembered as The Avengers beauty Emma Peel, along with Tushingham whose 1965 film The Knack…And How To Get It was emblematic of the Swinging London style. There’s also Terence Stamp as a mysterious man who is connected to Sandie in a way that provides one of the film’s many twists and red herrings. They aren’t too difficult to see coming, but the execution, especially when it comes to Stamp’s and McKenzie’s characters, is enough to keep the audience on their toes. Last Night in Soho is such a complete sensory experience that you can look past its lack of shocks and still be completely mesmerized by it.

Last Night in Soho opens in theaters on October 29th.