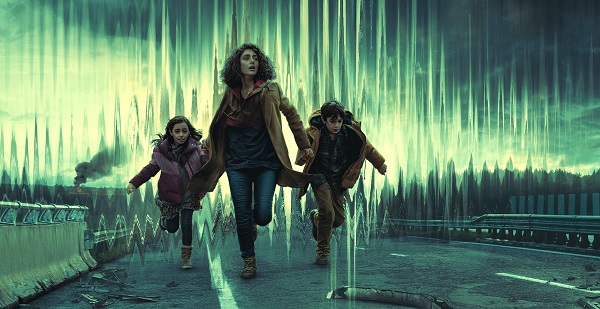 Apple TV+ has been on quite a roll. While not having the quantity of the other streamers, they make up for in quality as almost all of their Original Series have been absolute hits. I mean if you watched the Emmys, you know how much Ted Lasso is a force of nature. Another bonus from the house that Jobs built is that they aren’t afraid to dig deep into genre territory. With See giving us our fix for post-apocalyptic programming, as well as For All Mankind and most recently Foundation, Apple TV + has no problem delving into science fiction. Their newest series digs even deeper as we are now tackling aliens in Invasion.

Right off the top, Invasion operates a bit differently than most “alien invasion” movies or TV shows. Instead of relying on the spectacle of little green men coming to earth and scorching everything Independence Day-style, Invasion operates more like a globe-trotting drama like Babel or Traffic… that just happens to also have aliens in it here and there. This is both a criticism as well as a plus. The entire first episode introduces you to a half-dozen unrelated characters just going about their normal lives, unaware of just how royally screwed up the planet is going to be by tomorrow.

We have Aneesha Malik (Golshifteh Farahani) and her husband Ahmed (Firas Nassar) living a quaint suburban life in Long Island. They seem like a normal happily married couple, until we see that Ahmed isn’t as devoted to his wife as she would like. In addition, their children have been sent home from school as all the children at school have been sent home due to uncontrollable nose bleeds. Now would you want to try and brave an apocalypse with your adulterous spouse? There’s also Sheriff John Bell Tyson (Sam Neill), who is about to retire as a small-town sheriff, and on his last day just has to find two missing teens. Unfortunately, he ends up finding way more than that as the locusts are acting weird in a cornfield, and you know about aliens and crop circles!

But Invasion just isn’t an American story. After all, aliens come to planet earth, not just the USA. Over in Japan the Japanese Aeronautics and Space Administration (JASA) is about to do a launch into outer space and astronaut Hinata Murai (Rinko Kikuchi) is going up. She is secretly dating communications expert Mitsuki (Shioli Kutsuna), who has a vested interest in the invasion when things go awry after the launch. Mitsuki becomes passionately dedicated to figuring out what’s going on in outer space, as she wants to try and find her girlfriend. Also across the pond is a group of young British kids who are out on a trip to and from school. The main kid is Caspar Morrow (Billy Barratt), who suffers from epilepsy, but there’s more to his story than that as the season unfolds. He is joined also by school bully Monty (Paddy Holland), who he really should have punched before the end of the first episode, and his secret crush Jamila (India Brown). By the end of the day, the three of them as well as others on their school bus are forever intertwined by the events of the alien attack. The last character we focus on is Trevante (Shamier Anderson), a US soldier in Afghanistan (this show now seems outdated as we have pulled out of that conflict: thanks a lot Biden!) who is having issues with his wife as well. He’s spent too much time in the desert and communicating with her via Zoom isn’t being healthy for their marriage.

Invasion takes its sweet time establishing these characters, almost to a fault, before anything hits the fan. While we get to know each of them intimately, we really want to see the dang invasion! While the first episode ends with the chaos of the initial attack from the aliens, it’s actually by about episode 6 that we actually get to see these big bads. To be fair, Invasion does a great job showcasing the confusion that would really happen if an alien attack started. And by showcasing a diverse group of different people from all over the world, it gives a great idea of how different people would react to a global event like this happening. Some people would think the events are terrorism. Some would think it’s a hoax. Some wouldn’t believe it’s aliens until they get impaled by these monsters!

Speaking of the aliens, hats off to the production crew as they made a very unique creature that at first, looks too stupid to be a threat, but when we see them in action one-on-one, they are absolutely terrifying. There may be some people ready to tap out of the show early on, but by episode 6, there’s a “hunted house” feel to it that’s genuinely terrifying as an alien stalks the Malik family as they are holed up in a farmhouse in a very tense episode. From there on, the show picks up steam and shows just how real the stakes are for the show. And yes, the stakes are real. Some people will not make it as these aliens are BRUTAL!

While the first three episodes will be available on the first day Invasion is released, Apple might want to allow this to be one of the shows that’s completely bingeable instead of being week-to-week, as it takes a while to really get things going. My fear is that some people may tap out when they realize this is a show about people and not really about spectacle. In fact, there will probably be a significant number of naysayers that won’t appreciate the melodrama going on during an apocalypse. One of the best-acted character arcs is also one of the most frustrating as an unhappily married couple has to stay together to survive while dealing with aliens and the breakdown of society and in a real-world scenario probably would have left each other to fend for themselves.

That said, Invasion is a worthy experiment. By making the focus on what’s happening across the globe, it makes the show feel grand in its scope. The production, score, directing, and especially the acting are all top-notch. There’s a reason your iPhone cost $1,000: it seems as though they took all your money and put it into this show. Simon Kinberg (of the X-Men franchise fame), as well as head writer David Weil (Amazon’s Hunters and Solo), really put their foot into telling a grand story about how we may realistically react to the end of the world. It’s just a tad bit too overdramatic at some times.