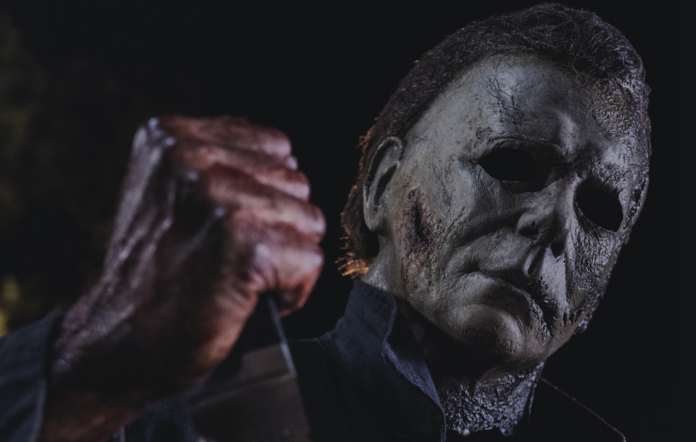 The chronology of the OG slasher, Michael Myers, is more then a little muddied at this point, so let’s start with a quick recap. 2018’s Halloween picks up almost 40 years after the original films events took place, retconning all of the events from 1981’s Halloween II on. There are a few other sub-branches of retconning but for our purposes here we’ll just stick with the primary timeline. Now, while they did retcon part 2 and everything past, they certainly didn’t sweep the DNA of that film under the rug. Much like the original Halloween II, Halloween Kills takes place immediately after the events of the previous film, is set mostly in a hospital, and features the community banding together to rid their town of this evil menace, to uneven returns. 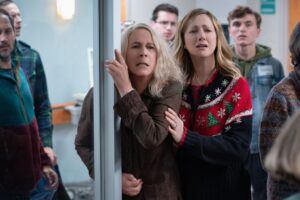 Starting EXACTLY where 2018’s Halloween ended, with Michael trapped in the burning basement of the Strode compound and Laurie bleeding out in the back of a pickup truck with her daughter and granddaughter Karen, and Allyson. This is done in such a way that the two films could be arranged as one continuous movie. Laurie and her girls make it to the hospital, but not before spotting the fire department barreling toward what is left of her home prompting them to scream “Let it burn!” …and really, they should have. To no one’s surprise, Myers is alive. Well, to the firefighter’s surprise for sure, but we knew better. A bad night becomes unmeasurably worse from here on out with Myers tearing a bloody swatch through Haddonfield while OG survivor Tommy Doyle rounds the town up to ensure that “Evil Dies Tonight”, as their rallying cry goes. Like two trains loaded with dynamite the two go barreling at each other leaving death and destruction in their wake. 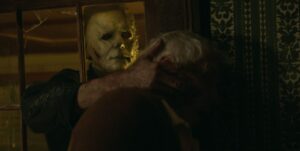 I thought the title was a bit too 70s grindhouse for my liking at first, now I get it. David Gordon Green was trying to prepare us for what was to come. No one is safe, there will be no jokes, no innuendo, no brief respite of teen sexuality, just kills. Credit where credit is due the Mike Myers he’s delivered is a true force of nature and brings new meaning to Dr. Loomis’s famed assessment that he is pure evil. Small changes make this Myers an apex predator, a great white shark on two legs armed with a kitchen knife. More then that, a killer that enjoys what he’s doing. Myers never seemed to relish in his murders, more he seemed curious, like a child. This Michael Myers poses his kills, he takes his time and is unendingly brutal. Even for me, a veteran horror aficionado…I had a hard time with a few of the kill shots in this movie. Not for the faint of heart or the unprepared. As a horror film, it delivers on every level you could hope. Well, all except one. 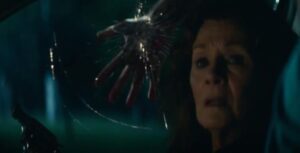 The only place I took issue with this film was the extreme stupidity of the Haddonfield residents. Just once I would like to see a horror film where people make, at least some, smart choices. I get it, a terrified and untrained person with a gun is just as dangerous to the good guys then the bad guys, but can’t at least of few of their decisions make sense? Knowing what you’re up against, when you knock Michael down can’t at least ONE person decide that they’re going to keep stabbing/shooting/hitting until they can’t anymore? While it doesn’t turn me off from the film, I found myself yelling at people and their dumbass choices WAY more then was probably needed.

The end result is a film that is completely devoid of happiness, no joy, no victory, no happy endings. A real look into true evil, both in the heart of our antagonist, the unstoppable Michael Myers AND in the hearts of scared people making uninformed decisions and resorting to mob mentality. I’m sure I’ll have more to say on what David Gordon Green was trying to convey through the citizens of Haddonfield plot and how that reflects some of the real-world horrors we’re dealing with right now. I’m sure of it, but for now I think I just need some more time to digest the carnage that befell this town and ready myself for the next installment where we may FINALLY get some sense of closure.