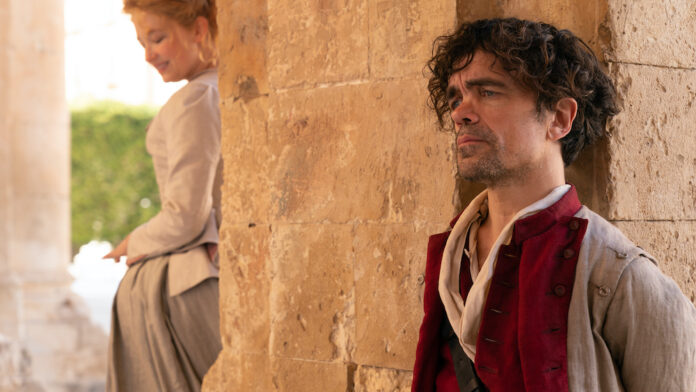 Years of too many high school romances have left a whole generation of moviegoers cynical to the plight of unrequited love, which makes Joe Wright’s adaptation of Edmond Rostand’s “Cyrano de Bergerac” all the more challenging. That it’s also a musical, with grand dance numbers makes it all the more difficult. But Wright, whose best films have arguably been his classic adaptations (Anna Karenina, Pride & Prejudice) gives the familiar romance verve and newfound meaning, starting with the casting of Peter Dinklage in the title role.

And thank goodness they didn’t saddle Dinklage with a gigantic nose. Erica Schmidt’s 2008 stageplay was brilliant for reimagining the self-conscious hero as a dwarf rather than someone shy about a protruding facial feature. He’s just as much a misfit in 17th-century Paris as ever, although as much for his combination of quick wit and swordsmanship than for his height. Early on we see him slice through an aging actor with his words worse than any blade, although we see him use the latter quite effectively in dispatching the mouthy attendant of the vile Duke de Guiche (Ben Mendelsohn). Dinklage is incredible here, and if there were any doubts about him as a swashbuckling leading man, they vanish in a whirl of movements and song.

But for all of his confidence in battle, we know Cyrano’s fatal flaw. His unrequited love for the lady Roxanne (Haley Bennett), here presented as his dearest childhood friend and an independent woman, as heard in the opening number “Someone to Say”, about the need for human connection. Cyrano does not believe someone like him is worthy of someone like her, but holds on to a glimmer of hope. And yet he’s crushed when she confesses her love for a common guard, Christian (Kelvin Harrison Jr.), a new recruit in his battalion. The simple Christian has love strike him like a thunderbolt the first time he sees Roxanne, but he isn’t nearly the wordsmith to win her heart. The bargain is simple: Cyrano will be Christian’s words, penning his love letters and even feeding him poetic words of adoration. In exchange, Cyrano can live vicariously through the handsome Christian, getting to see the emotional impact of his soul laid bare for her.

Honestly, Roxanne sounds absolutely exhausting to be with. And she has no problem putting her dear friend Cyrano in harm’s way of the Duke. But she hurts him more by asking him to protect Christian, to become his friend, and perhaps even to give his life for him, something Cyrano is willing to do out of duty to his friend and desire for her happiness.

We all know the broad strokes of this story, but Wright’s stunning visuals make this such a brand new experience. Shot in the midst of COVID protocols, the action was moved to to Sicily, allowing for unexpected natural landscapes like the black rock of Mt. Etna which served as backdrop to the most heart-rending song, “Wherever I Fall”. A true standout performed in a claustrophobic bunker on the frontlines of a hopeless battle, Wright’s camera slowly moves from one doomed to the next before pulling back, revealing that our two main characters, also part of this suicidal mission, were there all along, listening.

Wright is the epitome of a 50/50 director; bounding from one wild misfire (The Woman in the Window being his most recent prior to this) to a work of such tremendous skill you wonder how they come from the same director. His ornate style has always suited his period works better, and translate disastrously when misapplied to others. Cyrano is the best looking film he’s done, showing a wider range of approaches than we’ve seen from him. Recalling some of the dazzling action sequences from Wright’s 2011 thriller Hanna, a fight between Cyrano and ten armed men moves smoothly in the dimly-lit night, the camera tracking every swing of his blade.

Cyrano demands you shut out a lot of the stuff that makes no sense, like the famous balcony scene. To Wright and Schmidt’s credit, they do try to come up with a way for Cyrano preach is love for Roxanne in that moment, but she still looks like a dope falling for their fragile deception. Perhaps the greatest achievement is that Wright has kept this romance as compelling and ultimately as painful as it has been for well over 100 years. The final moments of tragic confession will leave you, as Cyrano so rarely is throughout Wright’s incredible film, completely bereft of words.