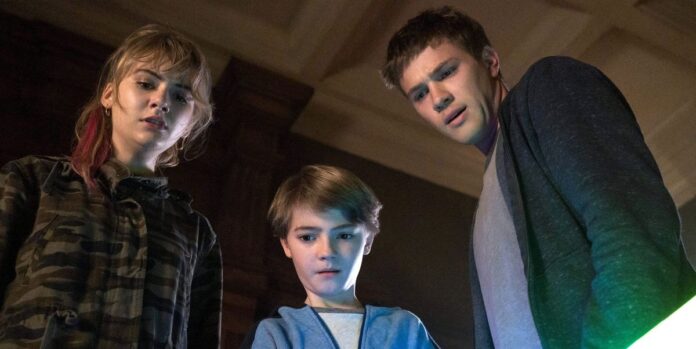 For much of the first season of Netflix’s hit series Locke & Key, the Locke siblings wrestled with their discovery of several magical keys in their family estate. That meant dealing with the demonic Dodge (Laysla De Oliveira) who sought to claim the keys’ powers, and also accepting their role as the keys’ guardians. Well, things are only going to get more dangerous in season two.

The Locke kiddos Kinsey (CODA‘s Emilia Jones), Tyler (Connor Jessup), and Bode (Jackson Robert Scott) thought they were done with Dodge, but they couldn’t be more wrong. Not only that, but this footage also makes clear the Lockes don’t know anything about what the keys truly are, and that could be deadly for them and their mother Nina (Darby Stanchfield).

Locke & Key is based on the graphic novel series by Joe Hill and artist Gabriel Rodríguez. The first season was huge for Netflix, and they’ve already greenlit a third season. The new season arrives on October 22nd.

After their father is murdered under mysterious circumstances, the three Locke siblings and their mother move into their ancestral home, Keyhouse, which they discover is full of magical keys that may be connected to their father’s death. As the Locke children explore the different keys and their unique powers, a mysterious demon awakens — and will stop at nothing to steal them.