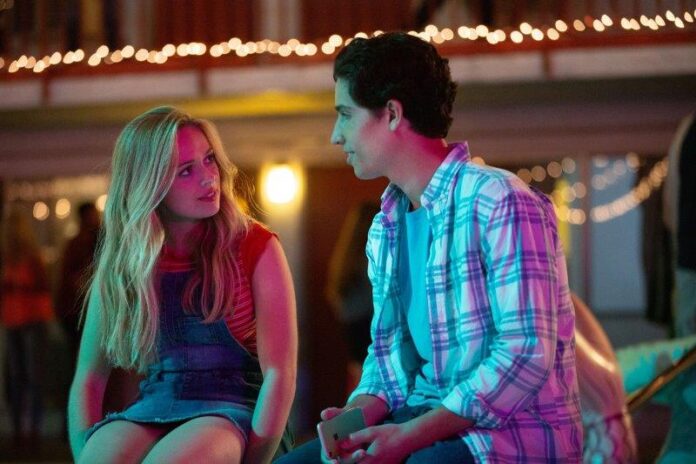 Movies about your final year of high school are timeless. They often capture that last moment in between youth and adulthood. Where you are no longer a kid, and are just on the cusp of adulthood. Often these types of films focus on sex and lust: that one last time to get the girl/guy before everyone goes away to the next chapter of their lives. Surprisingly David Henrie’s directorial debut This Is The Year opts for a safer route and instead focuses on love as friends go on a road trip.

Josh (Lorenzo James Henrie) is getting ready to start his senior year of high school when he meets his best friend Mikey’s (Jake Short) cousin Zoey (Alyssa Jirrels). He hasn’t seen her since they were kids, and back then she bit him. Little does he know, Zoey’s all grown up and is stunningly beautiful. They even like the pop band lovelytheband the same. While they spend their senior year being cordial with each other, he’s developed a massive crush on her. With high school almost ending, he realizes he’s wasted his time. He can’t even ask her to the prom. For one, she has a boyfriend named Kale (Gregg Sulkin), but also, she and Kale are getting ready to move away to Los Angeles to start their careers as artists. Confiding with his best friend/next-door neighbor Molly (Vanessa Marano), they hatch a plan for him to woo Zoey and ensure that his high school is complete, almost like a fairytale, or like an 80s teen romantic movie.

With a music festival (that already has sold-out tickets) coming soon, Josh and Molly devise a plan: just lie and say that you won tickets via a contest and invite Zoe to go on a road trip to the music festival. This will give him the chance to finally talk with her and express his feelings, worry about the actual tickets later. Tagging along on the road trip is Mikey, and Mikey’s older brother Donnie (Bug Hall) who owns their ride: a food truck called the “Millennial Falcon.” As the group goes on their trip to the music festival, everyone is having a great time. Them going to carnivals, staying at hotels that turn into full-on keggers, and just genuinely have a great time with each other. As This Is The Year continues, we realize that keeping up with the lie is going to be impossible, and it’s clear that Molly and Josh have a great connection, even if they don’t know that, yet. Ass a result, you’re just waiting for the other shoe to drop on both plots.

Keeping with the theme of plenty of 80s teen romantic films, This Is The Year follows the formula and is devastatingly predictable. You know it’s going to be Josh and Molly, but what makes the ride worth it is that the film is very engaging, well-acted, and the cast all have great chemistry with each other. This is in part that many of the stars have worked with director David Henrie (who in addition to This Is The Year being his directorial debut, also pulls double duty as Molly’s potential love interest Sebastian they meet along the way) on Wizards of Waverly Place (Selena Gomez is also an executive producer), so everyone’s comfort level with each other allows some great chemistry amongst the cast.

The film is devoid of sex, or even foul language, which gives This Is The Year an interesting level of innocence, even though it’s a film about high schoolers wanting to hook up, and the innocence of the film has a certain level of charm and genuinely makes the audience feel good while watching it as well. The film primarily focuses on the kids as no parents are even seen throughout the film. In fact, the only adult is actor Jeff Garlin who plays Josh’s teacher who requires him to send an essay about what high school means to him, as well as throwing out some good advice for the lovesick teen. Overall, This Is The Year had a great deal of charm that carries what easily could have been a dull high school drama and elevates the material.

This Is The Year is currently available on VOD.