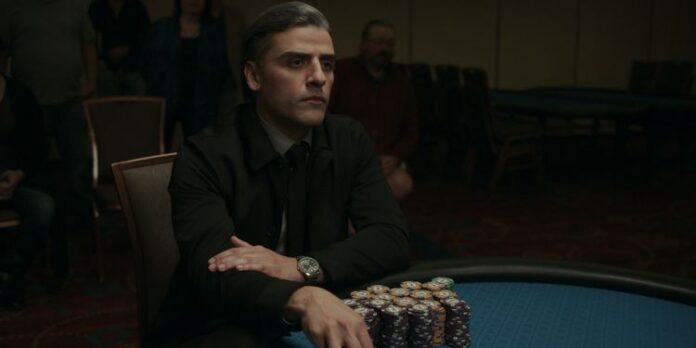 Paul Schrader’s late career resurgence began with First Reformed, a story of obsession and religious chaos that was one of the best movies of the last few years. Now the veteran filmmaker returns to throw another tortured soul into the fire with The Card Counter, and while not as successful as his prior effort, it’s a strong, singular work that touches on Schrader’s many pet themes while offering Oscar Isaac, Tiffany Haddish, and Tye Sheridan some of the best work of their careers. That it’s also set in the world of gambling, where chaos and order are at constant struggle, is just the cherry on top for this casino lover right here.

Isaac plays military vet William Tell, a former Abu Ghraib interrogator who has served an 8 1/2-year prison stint for torturous actions committed there. He used that time behind bars learning to count cards, and now uses those skills to earn a modest, unambitious living at small casinos. From the fires of chaos he found structure in the prison system. He travels from cheap hotel to cheap hotel, always covering his room in white sheets sortof like a serial killer, and keeps an anonymous profile. But all of that order he’s found is put into a blender when he encounters Cirk (Sheridan), the son of another officer who also took the blame for actions committed at Abu Ghraib. He wants revenge on the CO who got away with everything, Major John Gordo (Willem Dafoe), and wants William’s help to get it.

The Card Counter is essentially about one man’s redemption, but not in the way a traditional narrative would work. William is trapped in this constant struggle between the chaos he experienced at Abu Ghraib, and the order he found in Leavenworth prison. But the real prison is in his own head, where try as he might he can’t forget the past. His efforts to help Cirk escape a similar fate, we know are going to be doomed because…well, this is a Paul Schrader film and his tragic heroes are indeed that, tragic. The similarities between William and Ethan Hawke’s Ernst Toller from First Reformed are unmistakable. Both keep journals to chronicle their  failing efforts in a world that is rapidly spinning out of their control.

Adding to the film considerably is Tiffany Haddish as La Linda, an old friend who runs a stable of poker players. Haddish has been doing more dramatic work of late and it shows; she more than holds her own opposite Isaac in a role that could have been slight. She provides a welcome spark to the calculating, surgical precision Isaac brings. His William is a man who desperately needs to feel as if he’s in control, to feel otherwise is to invite that word I’ve used so much already, chaos. And so Isaac’s performance has to reflect that. He’s very restrained, scarily so.  When La Linda asks at one point if she’s “in any danger” around William, we honestly don’t know the answer.

I’m a sucker for gambling movies, but despite the title The Card Counter isn’t really about that. The opening scenes show William going through his card counting routine, spouting off little details and tricks that also reflect his contained worldview. But what he says is nothing new, there are no insights we haven’t heard in any film from The Gambler to Rounders. But when you figure out why William loves the casinos so much, not just blackjack but poker, his games take on an added dimension. I just wish they were filmed with a bit more energy. Casinos are loud, exciting places and too often the film drags during the actual action. Perhaps Schrader was looking to capture the prison atmosphere that William takes so much comfort in, but if so he did too good of a job.

Things pick back up in the predictably disturbing final act, which concludes like Schrader paying homage to his own filmography. The Card Counter will be too slow for some who might have wanted it to be Casino, but the hand it deals is a character study worth investing in, and more proof that Schrader has hit his stride.

The Card Counter is open in theaters now.