Joseph (Ben Whishaw) feels life slipping away from him every day at his job in Surge. It is a mindless existence that is eating away at him. He works security at an airport in London. The same noises, the same repeat motions – day after day. The same shit he has to deal with. Annoying customers, coworkers he doesn’t care about. Ones that don’t even know it’s his birthday when he brings in the cake.  Every day he just lets this angst build up inside of him. Every day Joseph is closer and closer to his limit. 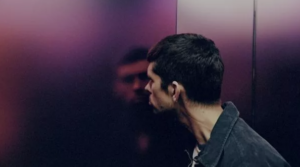 Joseph can count the few relationships he has in his life on one hand. The ones he does have, aren’t even healthy. There is Lily (Jasmine Jobson) – his coworker and possibly more. Then there are his parents. Joseph especially doesn’t have a good relationship with his father (Ian Gelder). While he is closer with his mother (Ellie Haddington), the relationship is still strained. This extra tension is all Joseph needs when he visits his rents for the weekend. His birthday celebration takes a turn, and all his senses and inhibitions go with it. A switch is flipped and everything Joseph has been bottling up is let loose on London.

Surge is directed by Aneil Karia who also wrote the film alongside Rupert Jones and Rita Kalnejais. Surge is both the feature length writing and directorial debut for Karia and a monumental task for a first-time writer and director. Portraying a man’s sanity slipping away is not an easy feat and Karia succeeds. Granted it doesn’t hurt to have Whishaw in your corner. Whishaw’s performance was outstanding and by far the most memorable aspect of the film. Whishaw’s body mannerisms and facial expressions tell the whole story. You can see exactly what is happening to the character, with not one word of dialogue. Whishaw seems so invested in the character and completely engrosses the audience in the film and Joseph’s journey. 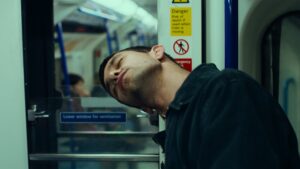 Karia’s script and direction not only portrays Joseph’s fragile mental state, but it unleashes it on the audience. Surge is designed to make you uncomfortable, and it does that in spades. From the ominous tones to the distorted camera angels – every decision seems to make your skin crawl. The shaky cam and blurred shots show Joseph’s instability. Karia’s intensity with the shaky cam and distortion is almost nauseating and some may find it to be so. 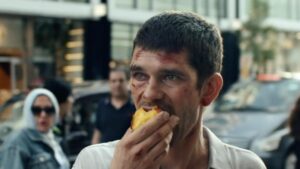 Surge will be a polarizing film. Many may find it difficult to truly enjoy a film that digs to your core and removes all comfort. However, liking a film and appreciating it are vastly different. It is easy to find yourself mesmerized by Whishaw’s performance and Karia’s directorial style. Surge isn’t perfect, and there are some parts that truly make you scratch your head. A few so outlandish that it almost ruins the atmosphere that Whishaw and Karia worked so hard to create. Surge is able to get past these moments and succeeds in the end. The film is not for everyone. If you are looking for a happy-go-lucky date night movie, this isn’t it. If you are looking for something to make you feel warm, safe, and fuzzy – look somewhere else. However, if you want to appreciate one hell of a performance, then look no further.

Surge premieres in theaters and On Demand Friday, September 24, 2021.