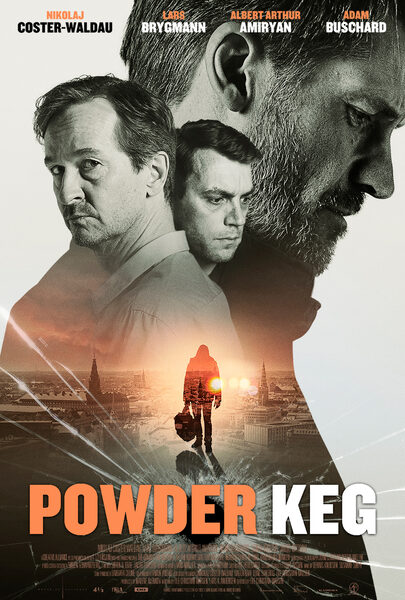 As an American, the word Terrorism only sparks one clear image, 9/11. That’s not the case for the rest of the world, sure it’s become kind of the global symbol for terrorism but there have been countless additional attacks across the world and whether the casualties’ number in the thousands, or just one person, for someone that is their new symbol of the evil that lurks out there.

Powder Keg (aka Krudttonden) from director Ole Christian Madsen takes a deep dive into the events of the 2015 Copenhagen shootings, the first of which took place at a cultural center hosting an event on freedom of expression, the second at a synagogue within the city. The shootings themselves function as the film’s third-act climax, with most of the film examining four characters, who’s totally different paths all lead to the same traumatic place. Setting the stage for the events are the four primary characters. Omar El-Hussein, a repeat offender recently released on parole who’s rage we get to see bubble up to the point of explosion. Rico (Nikolaj Coster-Waldau), a member of the SWAT team for the city who’s ready to hang up his gear for something less taxing on his body and life. Dan, who runs security at the Synagogue but has aspirations for a different career in logistics and Finn, a documentarian and militant advocate of free speech. Right from the start, assuming you know the story, you have a solid idea of what lies ahead for these people, but Powder Keg makes it its responsibility to make sure you know the lines of the fuse leading to the dynamite. 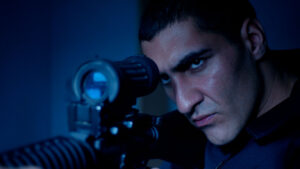 The film is a dramatized account of the events, but it feels like the characters, at least for the most part, are true to life. I think that may have been the primary win of this film, delivering characters that feel normal. All too often with films like this there’s an urge to overlay the hero paradigm on at least a few of these characters. You end up with people who weren’t just casualties of senseless violence, but rather on the path to their destiny. Life isn’t like that, and Madsen delivers characters who feel real for the most part. Finn, who seems like anyone else you know that has strong political feelings and needs everyone to know about them, almost feels the most familiar these days. I loved that Madsen used the film to highlight the terror that occurred, but also the fight for free speech and what that means. I probably should have mentioned sooner that the attack on the Charlie Hebdo offices in Paris, after their publication of a depiction of the prophet Mohammad, function as a big driver in the events at play most significantly the event at the cultural center which are happening as a direct response to those events in Paris. This is probably as good a place as any too discuss Nikolaj Coster-Waldau, not necessarily his performance here, which was fine…great even. No, I need to discuss how this is the highest profile thing the guy has done since Game of Thrones. Is it a personal choice? Did he make someone angry in Hollywood? I mean, not only is he the template for what a movie star should look like, but he also portrayed with ease one of the most dynamic character arcs in TV history. Sure that last season kind of undid everything he built with Jamie Lannister, but the 7 seasons prior to that should have put him on the A-List for at least a few years to come.

This all being said, there is one place that I would have liked to see a less standard take on what has become an archetype…the terrorist. 20 years removed from 9/11 and we still don’t have a clear understanding of what makes these guys tick. Yes, we know it’s Jihad, and we know about the 72 virigins and all that jazz, but people aren’t two-dimensional that way. Omar’s fury is portrayed as being solely fueled by the disrespect to his religion. Maybe that’s the way it really is, and it’s just something I can’t personally understand, but I feel like his psyche could have been delved into on a deeper level. I’m not saying I want to make him empathetic, the guy is a villain, no question about it. I’m just saying that to cut a few layers deeper wouldn’t have been the worst thing.

While Powder Keg (Krudttonden) could have drove further with some characters and peeled the onion back further, the end result is a respectful retelling of a horrible event that ended with 3 dead and 5 injured. More then the human casualties Madsen delivers a story that shows, what can be, the very real result of being an outspoken supporter for something we take for granted in this country, free speech. Not exactly a date night film, if you’re in the mood for something a bit more serious then Powder Keg should fit the bill.