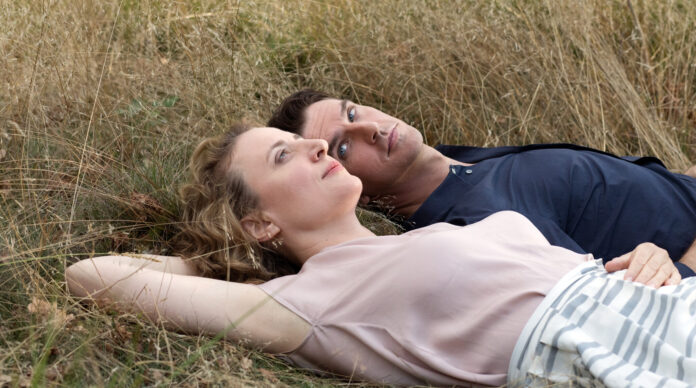 After close to two years in lockdown, dating and hookup apps are thriving. The desire to be loved or at least less lonely has never been stronger. Now is the best time for Maria Schrader’s I’m Your Man.

In the realistic/sci-fi/romance, Dan Stevens (Downton Abbey, Beauty and the Beast) plays Tom, a robot designed to be the perfect match for single anthropologist Alma (Maren Eggert). She is not actually looking for a partner but evaluating whether or not AIs like Tom should be granted human rights. They must live together for three weeks in order for Alma to receive funding.

As the two get closer naturally by living together, Alma’s own feelings about falling in love with something that isn’t real, start to creep in.

Written by Schrader (Unorthodox) and Jan Schomburg, I’m Your Man plays off of romcom troupes that don’t feel overdone or used here. Neither Stevens nor Eggert feel like typical romantic leads. The latter plays Alma’s reluctance to love her robot boyfriend with a gentle adverseness that is grounded, instead of exaggerated.

Dan Stevens plays a robot quite well. Channeling Data from Star Trek: The Next Generation with a subtle suaveness ala Cary Grant brings us a Robot we haven’t really seen but could be part of our future.

He also carries the character with this childlike sense of wonder and naivety. Tom tries so hard with Alma to make her happy. At one point he decorates the bathroom with rose petals, wine, and candles for a sensual bubble bath.

Schrader’s composition and script are the real stars here. I’m Your Man could easily have been schmaltzy or overly sentimental. Instead, a sweet contemplation emerges. The film’s soundtrack is one of the best I have heard this year and completely complements the film’s quiet nature while still giving it a quirky romantic comedy feeling.

Slightly reminiscent of the ‘Be Right Back’ episode of Black Mirror with Hayley Atwell and Domhnall Gleeson (though less sad), I’m Your Man questions whether or not creating the perfect person to love is really creating a person at all.

When Alma leaves Tom out in the rain, he doesn’t get upset or push back, leaving her slightly unsatisfied. Having something go right or someone doing what you want 100% of the time doesn’t leave you satisfied but wanting more.

I’m Your Man does end on an ambiguous tone. However, the Toronto Film Festival selection is so charismatic and sweet, the ending and slow-burn pacing can easily be seen as part of its charm.

I’m Your Man is playing in select theaters. Watch the trailer below.