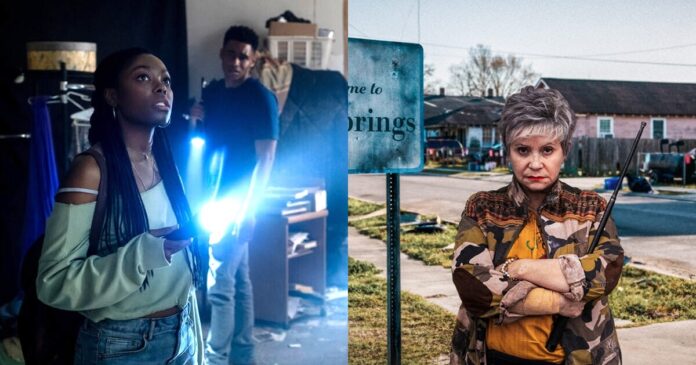 ‘Welcome to the Blumhouse’ is a film series consisting of theme-related and thriller-horror anthology that started in the fall of 2020. The series is developed and produced by Blumhouse Productions for Prime Video as Amazon Prime Originals. The first two installments (Bingo Hell and Black as Night) of the 4-movie Halloween 2021 addition are back and kick off October 1st. The second two installments, Madres and The Manor will release on Prime Video on October 8th. 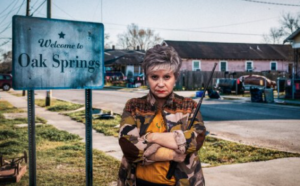 Oak Springs is a small and struggling neighborhood; one with some crime but emboldened residents fight to see their community and people thrive. In the barrio of Oak Springs live a strong and stubborn group of elderly friends who refuse to be pushed around, let alone, aside. Despite a new and secretive business man with deep pockets who comes to town and also brings the “fucking hipsters”, the local elders try to remain tolerable. One main thing they have in common is their love for the game of Bingo. All goes well until the smarmy businessman buys the Bingo Hall and completely changes the rules of the game. He spins his own version that promises folks a way out of their economic and emotional despair with suitcases full of money.

Lupita’s (Adriana Barraza, Thor, Drag Me to Hell, Babel) stubborn and hard-core leader locally as well as spiritually.  She is determined to keep the neighborhood together. Feeling a responsibility for her peers, she notices their disappearances, and takes it upon herself to find out what is going on. Lupita arrives at their homes to find nothing but stacks of cash and a relentless neon green goop that grossly sticks to literally every surface it touches. The devil like businessman, aptly known as Mr. Big (Richard Brake, Kingsman: The Secret Service, Doom) has taken over the Bingo hall. Each night the game is played, the money pot gets larger and the winners get more than they ever bargained for. As Lupita starts connecting the dots and refuses to cash in on the hype as Mr. Big increases the dangers as he desires to take over the entire town.

Bingo Hell is directed and co-written by Gigi Saul Guerrero (Culture Shock). The film explores the moral dilemmas of gentrification: Can money equal liberation and at what cost? The film has a unique aspect to it considering, a group of elderlies are doing some serious ass kicking. Two death scenes in particular are more graphic than I expected. The possessed self destruction is definitely good but intense. Overall, it’s not bad but not that great either. The film has more of a Twilight Zone and Creepshow kind of vibe and has a decent scare ambiance suitable for those that don’t care for a lot of horror and gore. The film also stars L. Scott Caldwell and Joshua Caleb Johnson. I rate it 2.5/5 Stars 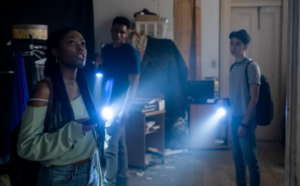 The second of the Blumhouse Anthology switches gears and generations of elders fighting the devil/demon over greed to teenagers slaying vampires who target urban and lower-class residents.

Shawna (Asjha Cooper, Everybody Wants Some!!, Hysteria) is a teenage girl with self-esteem issues who just hit a growth spurt. She finds confidence and support with her childhood best friend, Pedro (Fabrizio Guido, Mr. Iglesias). It’s been 15 years since Hurricane Katrina ravaged New Orleans and now a new threat comes around to leave its mark on the Big Easy. This new threat leaves puncture wounds on the throats of the city’s already vulnerable and economically displaced population. When Shawna’s drug-addicted mom becomes the latest victim of the undead, the 15-year old black beauty vows to even the score.

Shawna says good-bye to her adolescence and along with her three trusted friends, hatches a bold plan to battle the deadly vampires. They must infiltrate the vampire’s mansion in the historic French Quarter, destroy their leader, and turn his fanged disciples back to their human form. But killing hungry vampires is no easy task, and soon Shawna and her crew find themselves caught in a centuries-old conflict. The teenagers and each warring vampire faction is fighting to claim New Orleans as their permanent home including the town preacher (Emmy Winner, Keith David).

Black as Night is a teenage action-horror hybrid with a strong social conscience and a biting sense of humor. Cooper is a fantastic leading lady who beautifully steps her character up from young girl to strong black woman with the help of her best friend, a boy crush, and a peculiar rich girl. The film is directed by Maritte Le Go and carries a softer tone more perpendicular to an episode of Nickelodeon’s, Are You Afraid of the Dark? series. Although fun and enlightening, it lacks any real thrill or horror. A movie that’s only good for anyone breaking into the horror/thriller genre or those that like to keep their trills to a minimum. The film also stars Mason Beauchamp, Abbie Gayle, and Craig Tate. I rate it 2/5 Stars.

Black as Night releases on Prime Video on October 1st.