Johnny Depp can complain all he wants about cancel culture or whatever, the Fantastic Beasts franchise is moving on without him, and it will arrive sooner than expected. The third film in the Harry Potter spinoff franchise has been officially titled The Secrets of Dumbledore, and will open in theaters on April 15th 2022.

The new April date is up significantly from the July 15th 2022 it previously had. It had been originally set to open this November, but was hit by multiple delays caused first by Depp’s firing and subsequent replacement with Mads Mikkelsen as Grindelwald. Then the outbreak of COVID-19 set it back even further. Also, troubles with the screenplay by JK Rowling and Steve Kloves slowed things down. 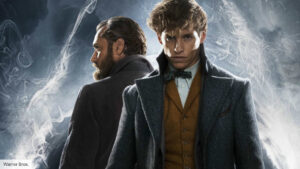 I can’t begin to tell you what happened in the previous film, which was pretty damn terrible. Something about Miller’s character Credence Barebone actually being another Dumbledore brother? Eh, that shit will probably get written out this movie or something.