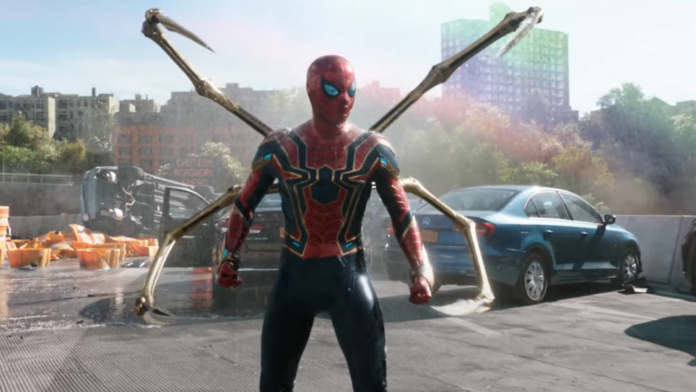 When social media blew the Hell up with the leaking of Marvel’s Spider-Man: No Way Home trailer, it was inevitable they’d drop an official version right away. And after a few hours of letting the rumors about what’s in it fly around, here it is and geezus there’s a lot to take in. Still, there’s only one Spider-Man and that seems like an announcement in and of itself.

The reason is that you can’t fire a web bomb without hitting a rumor that Tobey Maguire and Andrew Garfield will be reprising their Spider-Man roles from previous franchises. But in this No Way Home trailer all we’ve got is Tom Holland. I know, cue the disappointment! However, the Multiverse is definitely going to play a role. That much we knew from the moment JK Simmons’ J. Jonah Jameson showed up at the end of Far from Home. Here, we also get a look at Alfred Molina’s Doctor Octopus, and even Willem Dafoe’s Green Goblin is teased.  Expect to see Jamie Foxx as Electro, as well, and Benedict Cumberbatch’s Doctor Strange is all up in this joint helping Peter Parker take on baddies from other realities.

All of this, and Peter Parker is still wanted for murder and his identity has been exposed to the world. How can one movie contain so much? We’ll find out on December 17th