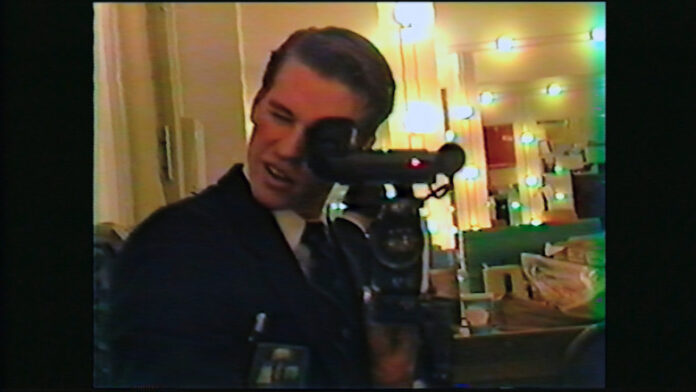 For over 40 years Val Kilmer, one of Hollywood’s eccentric and/or misunderstood actors has been documenting his own life and craft through film and video. He has amassed thousands of hours of footage, from 16mm home movies made with his brothers, to time spent in iconic roles for movies hits like Top Gun, The Doors, Tombstone, and Batman Forever. VAL is a raw, wildly original, and unflinching self portrait of Kilmer. Directors Leo Scott and Ting Poo help open the door and shine light to his artistic and complex world. Val Kilmer co-produces along with his children, Jack and Mercedes Kilmer.

His autobiography kicks off by introducing you to his childhood. Kilmer and his two brothers were their own creative geniuses but together, were a force to be reckoned with. They shared a love for making art, movies, music, and to always have fun. He sheds light of an early family tragedy that broke his family apart. Revealing the obstacles endured while trying to balance his rising career, support, emotional stability with his remaining family members.

Kilmer notes his time studying at Julliard before finally hitting small budget Hollywood films. Top Secret and Real Genius are slapstick, all nonsense comedies that were perfect for his personality. I instantly became a fan and big film Hollywood bosses must have caught on too. Kilmer’s next big roles in Willow and Top Gun catapulted his acting career.

One of the most notable memories shared is about his experience working on the Batman Forever film. The Kilmer boys were long time fans of the original TV show and often referenced scenes when creating their own work. When the opportunity arose for Kilmer to play Batman, he happily but blindly took the job. An underwhelming role that he later admits was a physical and emotional hot mess.

VAL gets more personal as Kilmer opens up about his marriage, children, and the world he wanted them to have. The relationship he had with his father was complex and may have been the crack that led to his collapsed marriage. Kilmer also took his work too seriously. He would spend all hours of the day for months perfecting his craft when he wasn’t traveling. The method acting extremism and absence only widened that crack. Despite his best efforts, the world he tried to build, came crumbling down.

Val Kilmer is tough as nails with a heart of pure gold. He powers through his struggles by keeping a healthy relationship with his kids and starts working on a new passion project. Kilmer takes on the real life role of a man whose life has similar parallels to life and death experiences. He playwrights and performs a one man show as author Mark Twain. The show is a success until Kilmer runs into a health complication. One that will have a devastating effect on the rest of his career and livelihood.

Val is a wonderful documentary because of its eccentric energy and lust for life that screams “Val Kilmer”. The amount of footage collected of his life is a genuine treasure. His passion for life, talent, and love for his kids and art is truly motivational and inspirational. So, I recommend checking it when it comes out this Friday.