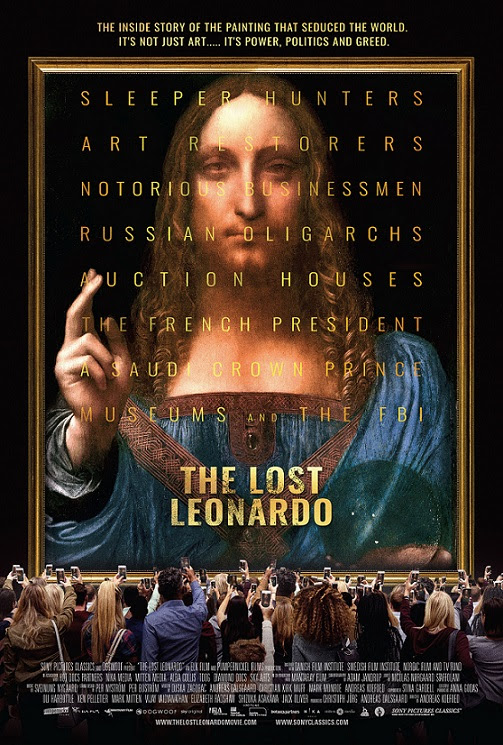 The Lost Leonardo (directed by Andreas Koefoed) is the incredible inside story behind the Salvator Mundi. The painting was discovered by Alexander Parish at a New Orleans auction house and is thought to be a Leonardo DiVinci or student of DiVinci. That slight suspicion was enough for Parish to purchase the painting for $1175. He then lent it to Diane Modestini for restoration and further evaluation. This documentary film is an intriguing revelation of art world and exposes the controversy surrounding this newly discovered painting. The last time a DiVinci painting was authenticated was 100s of years ago.

The portrait of the Salvator Mundi had previously been examined to show excessive paint to the face but the lower half is largely untouched. In her restoration process, Modestini discovered pediments throughout the painting but one particular aspect stood out to her the most. The conclusion of details collected recognized that the painting had been established around the 1500s. She feels confident that the Salvator Mundi is a legitimate Leonardo DiVinci painting. Considering there are currently 15 known DiVinci paintings throughout the world, this is a huge deal!

Modestini’s recognition and restoration of the Salvator Mundi being a DiVinci led to deeper scrutiny. More people wanted to immediately backtrack where it came from. The earliest documentation of its existence was traced back to a London auction house in the early 1900s. Once officially restored by Modestini, it was sent to London to be examined by DiVinci experts/scholars. Despite the lack of proper confirmation, The Salvator Mundi was sent back to the U.S. labeled as Leonardo DiVinci.  It was given a new hefty price tag of $200 million and finally exhibited to the public.

Now that this infamous painting is out for everyone to see, more eyes were able to analyze the deeper details it possesses. Critics, collectors, and scholars break down aspects that question and practically disprove the authenticity of the Salvator Mundi being a DiVinci painting. Its questionable reputation stalls the sale of the painting until a French businessman, Yves Bouvier takes interest.

Yves Bouvier owns and operates Freeports all around the world. (Freeports are a whole other avenue that is mind awakening on its own). That business venture gives Bouvier access to valuable artifacts owned by eccentric billionaires looking to store, buy, and sell their treasured pieces. He purchased the Salvator Mundi in a private deal held in Geneva for $83 million. Not thinking that transaction would ever go public, Bouvier then sells to the actual party who wanted the painting from the get go. Russian oligarch, Dmitry Rybolovlev, who’s purchased work from Bouvier before and was willing to pay close to the original asking price. Leaving out what he initially paid for it, Bouvier sells the painting to  Rybolovlev for the well negotiated price of $127.5 million.

All hell broke loose for Bouvier when the New York Times published an article expressing the sale that took place in Geneva. His life was turned upside down when he refused to pay back the full price paid for not just the Salvator Mundi painting but 36 others as well. A large legal battle ensued and Bouvier’s reputation was destroyed. The drama between Bouvier and Rybolovlev kicked the door wide open to the dark word of the art game. Now forced to quickly sell those 37 paintings, Bouvier turns to the help of one of the world’s largest and respected auction houses, Christie’s.

Christie’s Auction House is in the business to sell, sell, sell. They kick off a brilliant marketing campaign that reaches out and grips the souls of people everywhere.  The hype and excitement draw global attention. The fully loaded question on everyone’s mind is: Will the Salvator Mundi sell and for how much?

This must-see documentary film is a captivating tale that keeps you on the edge of your seat. The Salvator Mundi’s fate is determined by an insatiable quest for fame, money and power. Economics and greed fuel the art game which comes into action when an unexpected player establishes a new set of ranks. This nail biting venture meets an end when the Salvator Mundi is successfully sold to Prince Mohammed bin Salman of Saudi Arabia for a heart stopping $450 million dollars.

The Lost Leonardo unravels the hidden agendas of the richest men and most powerful art institutions in the world. This inside look reveals compelling interviews and shows how vested interests in the Salvator Mundi are of such tremendous power, that truth becomes secondary. Many eyes are now focused on the art world. Organizations are looking to break it down and probably regulate it. Now that the Saudis have the painting and it’s authenticity still questionable, what do they plan on doing with it, why, and where will it go from here?

I love everything about this documentary film. It’s juicy, it’s mysterious, and has a narrative that is comparable to a Guy Ritchie, even a Wes Anderson style of storytelling. One of my top favorite and highly underestimated films that comes closest to this real life escapade is the 2015 Johnny Depp movie, Mortdecai. It wouldn’t surprise me at all if there is a movie made from this experience and if there was, I would definitely see it. Until then, feast your eyes and a truly amazing documentary that will shock the pants right off of you. Highly recommend it!

The Lost Leonardo is available now in select theaters.