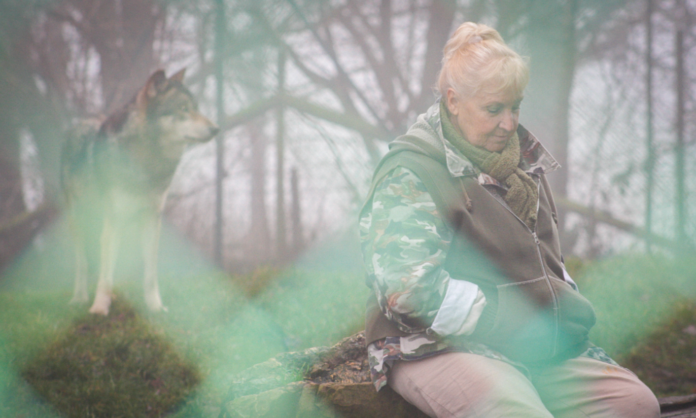 Misha and the Wolves is the dramatic tale of a woman whose Holocaust memoir took the world by storm. People wanted to know more about the little girl who wandered and survived the wilderness in search of her parents. It’s winter and WWII is ravishing Europe. The girl befriends another family while trying to stay alive. The woman’s book is a success but a fallout with her publisher , who turned private investigator, revealed an audacious deception created to hide a darker truth. Writer and director, Sam Hobkinson dives into Misha Defonseca’s fictitious world and chronicles the poignant events that stemmed from it.

Misha DeFonseca and husband Maurice are Belgium immigrants who moved to Millis, Massachusetts in the late 80s. They’re an older couple known for owning many cats but are overall friendly. Misha quickly rises to local fame with friends and neighbors for her entralling memories of surviving the Holocaust and is eventually invited to speak at the Temple Bel Torah on Holocaust Rememberence Day. Her story is so captivating that a local radio host had to share Misha’s tale. More people throughout the state tuned in to hear about her survival experience.

Living in Belgium and at 7 years old, Misha’s parents were deported for reasons unknown to her. Under the circumstances she was left in the care of a Catholic foster family, who she claims didn’t love her. Misha was told that her parents were taken east to Germany and in her mind, she thought she could easily get to them. Despite admitting to not having any prior knowledge of her family, including a surname, she decides she wants to locate her parents. Packing only a knife for protection and her determination, Misha walks east and in the middle of winter to find them.

Desperate to be reunited with her parents, she endures the cold weather by sleeping under bridges and stealing food from farmers. She recounted more memories of reaching villages filled with decay and death. Even stabbing a soldier who tried to rape her. Fearing she may get caught, Misha chose to stay deep in the woods where she meets an unlikely friend. A wolf. She is cautious but is soon welcomed into the pack and survives off of their scraps.

Jane Daniel is the owner of Mt. Ivy Press which is a small publishing business in Massachusetts. As soon as she hears Misha’s story, Jane urges her to write a book. In 1997, Misha publishes Misha: A Memoire of the Holocaust Years. The book sells but not by popular demand. Jane secures deals with Disney and Oprah but they fall through when Misha backs out. She feels taken advantage of by Jane and refuses to work with her any longer.

The falling out between Misha and Jane led to a devastating lawsuit. Misha felt Jane capitalized and profited from her story and successfully sued for $22.5 million. Misha then took her book overseas to Europe where her proclaimed memoir became an instant best seller. The popularity and success of her book spawned a French film adaptation in 2007. Regardless of her ability for garnering sympathy, the holes in her story were burning wider beyond her control. Once the fire of truth had spread publicly, her respected fame and credibility went up in flames as well.

From the get go, Misha’s story doesn’t seem plausible. Intriguing, sure, but for a 7-year-old girl to take on all by herself is highly unlikely. Extreme weather conditions, starvation, the likeness of being eaten by wolves rather than befriending them, no supposed memory of her parents surname, and let’s not forget about the Nazi’s literally searching everywhere for selected undesirables. I am shocked that no other educated adult thought to ask more questions and have Misha DeFonseca provide proof before publishing.

Jane Daniel is just as shiesty. In the end, she was only looking out for her best interest. A con playing another con and the only people who really got hurt are the ones who naively trusted Misha’s story and those that actually survived the Holocaust. Quite frankly, Misha and her story never should have gotten any more light to shine on it. I understand wanting to expose the wolf in sheep’s clothing, so to speak, but stop giving them what they crave the most. Attention.

Evelyne Haendel is a true Holocaust survivor and lives in Belgium as a geneologist. She was a key asset in researching the life and family lineage of Misha DeFonseca.  Her story, her life, and her composure are more genuine and heart gripping than Misha’s. Evelyne is the foundational core to the heart of this film that made watching it worthwhile. I would much rather watch an autobiography about Evelyne than of a con woman and her publisher who still don’t grasp, nor seem to care, what the Holocaust was all about. What a damn shame.

Misha and The Wolves will be available on Netflix Wednesday, August 11th.