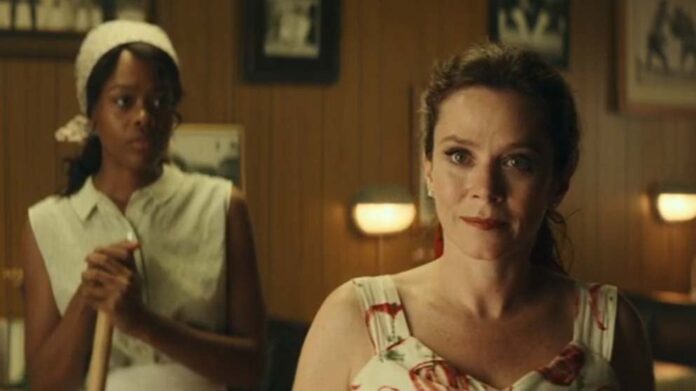 Grace Gordon (Anna Friel) has made her way back to her southern hometown after quite some time in Charming the Hearts of Men. Her father, a prominent judge in the area, has suddenly passed away. Grace did not expect to stay for long, but she receives bad news from the town banker Radford Lotts (Tom Schanley). Apparently, there is no money left in any of her father’s accounts and Lotts gleefully is ready to foreclose her property. Property that has been in the Gordon family for decades. Property that Grace is not going to lose so easily. Grace quickly realizes that being a woman in the early 1960s with no man to help her is no easy feat.

With two of her father’s house keepers Viola (Jill Marie Jones) and Mattie (Starletta DuPois) pushing her along, Grace feels the pressure of finding a husband. After countless terrible dates, she senses a spark with the local congressman (Kelsey Grammer). Determined to be independent and successful, Grace works to make ends meet. She starts by selling jewelry and family heirlooms to the town’s pawnshop owner George (Sean Astin). Grace applies for countless jobs, willing to work for next to nothing and be demeaned – anything to pay the mortgage. As Grace begins interacting with more and more women in the area, the inequities of the country become clearer to her. Finding equality for everyone becomes a central focus for her and she will stop at nothing to see it through.

Charming the Hearts of Men is the writing and directorial debut for S.E. DeRose. Susan DeRose is an Atlanta based restaurateur turned filmmaker. Charming the Hearts of Men is certainly an impressive debut. While it is far from perfect, the story is enjoyable, and the acting is above par. DeRose successfully transports the audience back to the early 60s. The music, set, and costumes all land perfectly and work in tandem to capture that moment in time. The film is based on a true story but is a fictional account. While the film touches on some of the uglier aspects of the time, it only scratches the surface. It is a family-friendly way to orient a younger crowd to the time period without diving into the deep end. There is not a great deal of character development, but you find yourself rooting for a handful of characters throughout.

DeRose’s script has a touch of humor and some interesting ideals with particular lines that stick with you. The main issue is how quickly things change. Charming the Hearts of Men made it seem too easy. It’s as if one conversation or dinner can flip a switch and everyone be on the same page. Certain characters are hyperbolic and stand out like a sore thumb. There are a few cringe worthy moments that are reminiscent of a made for TV film, but they are rare. Charming the Hearts of Men is a good entryway into the time period, but it’s sugar coating of some key areas holds it back. Charming the Hearts of Men isn’t able to stand out from the crowd or be truly memorable, but if you are looking for a period piece with a positive message – it might fit the bill.

‘Books Of Blood’ Trailer: Clive Barker Brings The Twisted And Macabre To Hulu Next Month