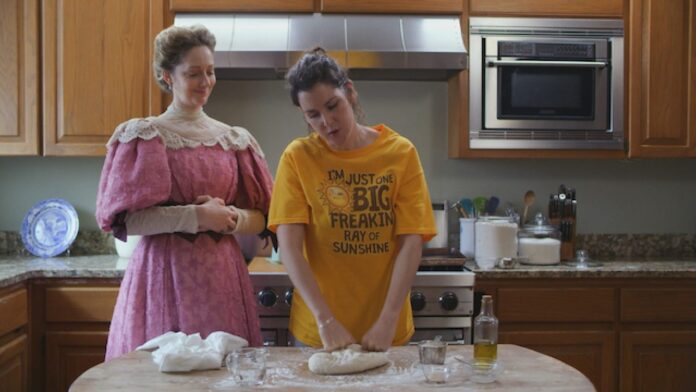 Judy Greer. Melanie Lynskey. I’m already sold. Don’t care what the Hell the movie is. But you tell me it’s a buddy comedy that has Greer playing a stuck-up ghost? Uh, yes please! That’s what Lady of the Manor has to offer and I’m here for all of it.

Something about Lynskey when she’s playing the under-achiever that is just so perfect, perhaps because she’s so damn good at everything? Here, she’s just such a character, Hannah, a total stoner who is hired to play Lady Wadsworth (Greer), a Southern Belle who died in 1875, as part of a local gig. But then Wadsworth’s ghost shows up and reads Hannah the riot act and says she’ll keep haunting her until she shapes up.

Cue the adultery jokes, the old person jokes, the drunk driving jokes, and more. Greer over-enunciating the word “cockblock”? Lynskey letting one rip and blaming it on somebody else? Hilarious! It’s even got Justin Long, who co-wrote the script and co-directed with his brother Christian, plus Luis Guzman, and Ryan Phillippe as part of a pretty great cast.

Lady of the Manor opens in select theaters, Apple T, and digital on September 17th. Blu-ray and DVD on September 21st.