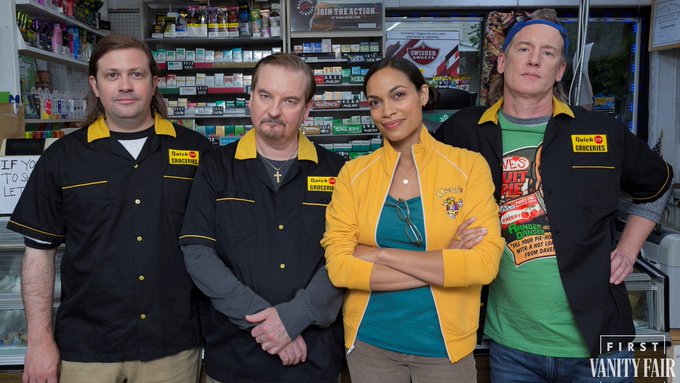 For a long time it seemed like Kevin Smith would never get around to making Clerks III a reality, but now we have definitive proof that a sequel to his defining comedy classic is on the way. Lionsgate has debuted the first image (via Vanity Fair) from the film which is shooting right now. And for fans of either Clerks or 2006’s Clerks II, it should spark quite a bit of nostalgia.

The image features stars Brian O’Halloran (Dante), Jeff Anderson (Randall), Rosario Dawson (Becky) and Trevor Fehrman (Elias), and looks almost exactly as the first promo shot for Clerks II. The difference? In that one they were standing at the Mooby’s they all worked at, but now they’re in from of the iconic Quick Stop they now own.

I’ll be honest, Clerks III is going to be an emotional roller coaster for me. I adore Clerks, just as I do all of Kevin Smith’s movies from that early period in his career. These are characters that I met nearly three decades ago (!!!) and have aged right alongside them. Shit, they’re all practically my age, and the concerns they face have matured just as mine have.

Clerks III doesn’t have a release date but we’ll let you know when it does.