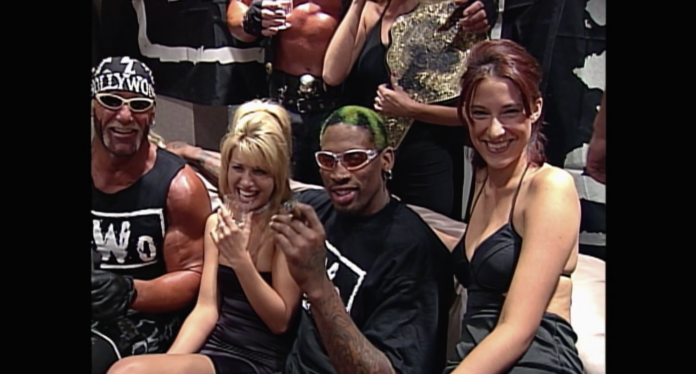 The hit Michael Jordan/Chicago Bulls documentary The Last Dance opened up a can of worms, a lot of them, actually, about one of the greatest championship dynasties in all of basketball. One of them was eccentric and controversial power forward, Dennis Rodman, and the antics he committed on and off the court distracted the team during their second championship run. One of those was the impromptu trip to Las Vegas right in the middle of the 1998 NBA Finals against the hated Utah Jazz. As a diehard Bulls fan, I’ll never forget when Rodman left the team and showed up on muthafuckin’ WCW Nitro the same damn night.

Well, Rodman’s crazy getaway is now becoming a movie from producers Phil Lord and Chris Miller. Lionsgate has picked up the rights to 48 Hours In Vegas, a spec script about the unexpected friendship Rodman formed with a skitty assistant GM during the madcap adventure away from the team.

The script is by Jordan VanDina, a writer on Animaniacs and the recent Hulu comedy, The Binge. No word on a director or who will play Rodman. Shit, he could probably play himself still and is crazy enough to do it.

“Dennis refused to follow the herd,” said Lord and Miller. “That is what made him a target and it’s also what made him a star. His weekend in Las Vegas is full of fun and high jinks but it is also full of important questions about the way public figures, and workers are treated, especially when their individuality is expressed so vividly.”

Well, that’s one way of putting it. He was a jackass and a malcontent but his talent overshadowed all of the distractions he caused. I had a love/hate relationship with Rodman as a Bulls fan. Hated seeing him on wrestling when he was hanging out with Hulk Hogan and the NWO, but always loved the rebounds and defense he provided, plus the occasional glimpse at Carmen Electra in attendance. Can’t beat that. [Deadline]