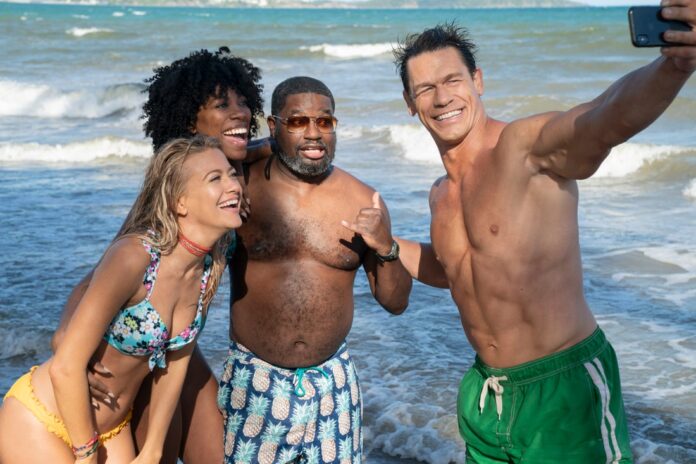 John Cena has more than one movie coming out in August, although it looks like he’ll be causing hilarious chaos in both. One if obviously his role as Peacemaker in The Suicide Squad, but another that many might not have heard about is Vacation Friends. The comedy from Disney’s 20th Century Studios has Cena returning to the same raunchy territory that we saw from him in Blockers, and we all remember how funny he was in that.

Cena stars alongside Meredith Hagner as a wild and crazy couple who befriend another straight-laced pair, played by Lil Rel Howery and Yvonne Orji, while in Mexico. After they all really let their hair down and return home, the level-headed couple are appalled when the unhinged ones suddenly crash their wedding.

In this raw and raunchy comedy, straight-laced Marcus and Emily (Howery, Orji) are befriended by wild, thrill-seeking partiers Ron and Kyla (Cena, Hagner) at a resort in Mexico. Living in the moment, the usually level-headed couple lets loose to enjoy a week of uninhibited fun and debauchery with their new “vacation friends.” Months after their walk on the wild side, Marcus and Emily are horrified when Ron and Kyla show up uninvited at their wedding, creating chaos and proving that what happens on vacation doesn’t necessarily stay on vacation.