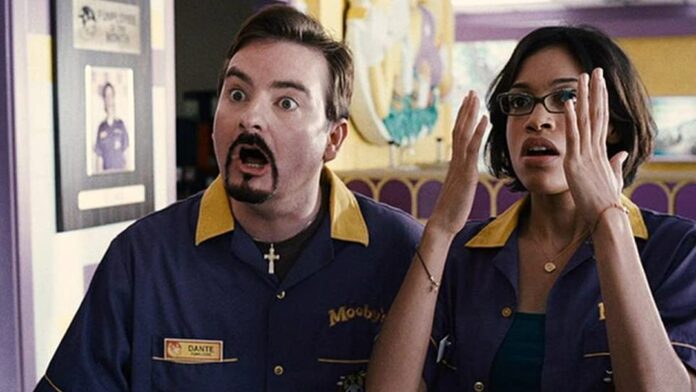 Life as a Kevin Smith fan can be full of disappointment. No, I’m not talking about the films that get made. Say what you want about them, but personally I’ve enjoyed something from each. I’m referring to Smith’s propensity to talk about all of the projects he’s got in the pipeline, regardless of how likely they are to go. So many times I’ve been ready to see a film of his only for it to disappear off the radar. It’s a regular thing in Hollywood, the fact is that most flicks don’t get made, but his openness with fans is a double edged sword. Clerks 3 is a film that Smith has been saying was coming for years, but was axed several times. Most recently due to Jeff Anderson (who plays Randal) not wanting to come back for a third film. I’m not sure how, but Silent Bob pulled it off and got everyone back with an official start of shooting on the books for next month on Clerks 3.

Smith announced on his Facebook page today that Lionsgate came through with the funding for the third-installment in his cashier cowboy trilogy and the film many of his fans have been waiting on is green-lit! For anyone that follow’s Kevin Smith, you know he takes a lot of inspiration for his films from his life, Clerks 3 will be no different. Smith suffered a massive heart attack a few years back while on tour for his Q&A style standup. That life changing event is going to be front and center in the plot for the third film.

“In the story this time, I give Randal the heart attack that almost killed me. But rather than succumb to the reality of middle age, Randal rages against the dying light by telling the story of his life in an indie film he shoots with his fellow clerks at Quick Stop!”

As if that wasn’t enough good news, the best thing about Clerks 2, Rosario Dawson, is confirmed to be coming back for the film. For all his madness of media in recent years the iconic director has always known how to mix sentimentality with comedy, I can’t wait to see how he tackles what will be the closing chapter in the story he first started telling 27 years ago.

Follow us here for all the latest as it develops!